In the wake of a recent injury to Chief of Security and Safety John Twining, Assistant Chief David Barger has assumed Twining’s position for an unspecified amount of time, according to Richard Ferguson, senior vice president for administration.

Ferguson released a MyQ announcement on Jan. 20 which identified an accident which will leave Twining out of office for an “indeterminate amount of time.”

Despite his absence, Twining has remained a part of day-to-day operations, and according to Barger, no changes will be enacted without Twining’s consent. Barger, a night supervisor on campus for more than 10 years, will play the role of “boots on the ground.” 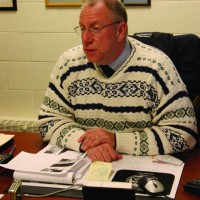 “When we need the physical presence of a chief, whether it is dealing with law enforcement or admissions or anything on campus – when they want to see a face, I’ll be there,” Barger said.

In his Irmagarde Tator office on Friday afternoon, Barger appeared to have settled into the role, calming down a questioning parent on the phone and keeping tabs with Residential Life during a Chronicle interview.

“It’s really no different than what I have done before,” Barger said.  “A few extra meetings, and some more responsibility. I am only too happy to fill in for the chief at this time, to make sure everything runs smoothly.”

Prior to his time at Quinnipiac, Barger worked for 24 years in the Connecticut State Police, working his way to a master sergeant role.

“He’s not the kind of guy to sit behind a desk,” SGA liaison for security and transportation Ben Wald said. “He is fair and understanding, and has always been there for me as a student.”

And in what Wald called “really unique timing,” he found exactly what he had been looking for from campus security for the past year: two guards on the night shift at the York Hill campus. On Thursday night, one was controlling traffic, the other patrolling on foot.

“They were doing exactly what they needed to do,” Wald said. “Not policing, just making their presence known.”

Wald has been “extraordinarily pleased” with the accessibility of Barger thus far.

“Whenever I’ve reached out to him, he’s always made a point to reach out to me in a timely fashion and with the utmost honesty and integrity,” he said. “It’s something I haven’t always had with security.”

Barger will continue his work as a night supervisor, working closely with Residential Life, on top of his interim chief stint.

“My primary responsibility and duty here is to maintain the continuity of service that the security unit gives to the university community,” he said. “If (the students) are not safe and secure, they cannot be educated. They cannot be in an environment where they worry about something happening to them.”