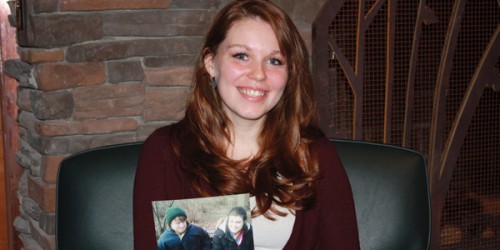 When Shannon Fitzmaurice left to study abroad in Rome, she tearfully said goodbye to her parents, and younger brother and sister, Brendan and Meghan. After excitedly counting down the days during winter break of her sophomore year at Quinnipiac, Fitzmaurice realized she would be without her siblings, also two of her best friends, for several months.

“I remember the morning I had to leave I couldn’t stop crying, but they had no idea I was leaving,” Fitzmaurice recalls. “They just thought they would see me later that afternoon.”

“When I was first growing up, I didn’t realize that there was a difference, to me they were just my brother and sister,” she said. “My parents have been very supportive. They are probably my two biggest role models. They really put everything they had into Brendan and Meghan’s education making sure they had the best of the best. They didn’t leave me out either. They put me still as a priority, which I’m really grateful for – and they still do.”

Autism is a developmental disorder that appears in the first three years of life and affects the brain’s development of social and communication skills, according to the U.S. National Library of Medicine.

Fitzmaurice said there are several misconceptions about autism. She said people sometimes associate autism with mental retardation, but the two are different neurological disorders. Fitzmaurice added those with autism are sometimes perceived as low functioning and can’t do anything for themselves. However, she said her siblings are far from that description.

“My brother and sister have the two best personalities I know. They are active, they are really funny and I’m really close with them,” she said. “From people on the outside looking in, they think we can’t do much with them, but we are able to do so much.”

Fitzmaurice said children with autism have distinct personalities and live in their own little world. Brendan sees the world as one big Disney movie and will relate a character to someone in the family, according to Fitzmaurice.

“He’s always the main character and my sister is always the villain,” she said. “I’m usually the damsel in distress or the other villain.”

Fitzmaurice specifically references “Cinderella” as an example of how her brother sees the family.

“My brother is Gus, the little mouse always having trouble. I’m Jack, so I’m like his best friend, and my sister is Lucifer the cat because Meghan is really sinister and she’s just really sneaky,” she said. “And then my parents are Cinderella and Prince Charming.”

Fitzmaurice mentioned that both her siblings have different needs. She said Brendan is aware that he is autistic and is self-conscious about it. She said she wants Brendan to make friends and have a strong support system outside the immediate family.

In regards to her sister, Fitzmaurice said she believes Meghan sees everyone else as different.

“She’s really growing into her own. She has a really great personality,” she said. “I think it’s so funny because she has this attitude. She doesn’t talk, so you can just read her emotions and she’s so clear about how she’s feeling. If she doesn’t want to talk to you, she will not acknowledge your presence, or if we do sign language, she’ll just shut her eyes and walk away.”

Fitzmaurice said Meghan looks up to her and the two have a sisterly bond.

Fitzmaurice assures she and her brother and sister are like any other group of siblings. She said they fight, they tease and they joke around.

With every new experience, Fitzmaurice keeps Brendan and Meghan in mind.

“There’s been a lot of times where you wanna give up and you’re just so overwhelmed and just so stressed,” she said. “I always think of Brendan and Meghan and how they don’t have the chances that I do. It makes me appreciate life so much more and anything I do, I really do it for them – just going to school and going to college, being on a sports team, having friends. I know if I could I would give up anything to let them have that for a day.”

Senior Anissa Holness has known Fitzmaurice since they lived together their freshmen year at Quinnipiac. Holness said Fitzmaurice is one of her best friends.

“Shannon’s the kind of friend who will stop whatever she’s doing and be there for you when you need her,” Holness said. “Shannon always has my back and I love her, and I trust her more than I trust a lot of people in my life.

“She’s the realest person I know and she’s so funny,” Holness added. “But she’s like the kind of funny that doesn’t know they’re funny, kind of like Colin Firth.”

Seniors Patrick Noonan and Sean McCarron met Fitzmaurice freshmen year and have stayed friends ever since.

“Shannon is very full of life, very spirited, very happy,” Noonan said. “She helps you out when times are rough.”

McCarron said Fitzmaurice is one of the “realest” people around.

“She’s just ‘Shannon-igans,’” McCarron said. “She speaks her mind, you know what she’s thinking. She’s not just the person you say ‘Hi’ to in the hallway. If you know her, you’re best friends with her. If you don’t know her, you’re missing out.”

Upon her return from Rome, Fitzmaurice met her family at the airport. She said her brother was so excited to see her, while her sister just wanted her iPod.

“She grabbed my purse and took my iPod,” Fitzmaurice said smiling. “It’s Meghan.”

Through her brother and sister, Fitzmaurice said she has learned patience and not to judge people too quickly. She said you never know who is going through a rough time and that it’s important to appreciate the small things.

“Everyone has their own story,” she said. “Sometimes you take it for granted and some people, like my brother and sister, don’t have that, and I wish they did.”