School of Communications faculty are discussing a reconstruction plan for newsroom SB 253 and classroom SC 260 to take place this summer if approved by administration and ready for the fall, according to Kamlet.

“The space was fine when it was designed 12 years ago but it doesn’t work for us now,” Kamlet said. “Students have their backs to instructors, both rooms are pretty dark, they don’t have up to date technology, so I decided that we ought to make them better, make them brighter, make them more functioning.”

The rooms are “not well designed” and “don’t serve their purpose” anymore, Kamlet said.

“We’re pretty much locked into the space that we have in the moment; there’s no ability to expand space,” Kamlet said. 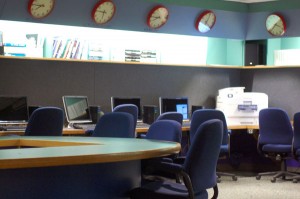 [/media-credit]The newsroom in SoC is one of the room the school is discussing renovating over the summer.

Kamlet met with the SoC faculty this semester, getting the majority on board, and will next meet with Mark Thompson, senior vice president for academic & student affairs, for his approval on talking to the architect about the construction plans.

“I think that the faculty all agree that the rooms don’t serve their purpose anymore,” Kamlet said. “And in fact, two faculty members may have to give up their offices and even they are in support of the redesign of the room.”

Both classrooms have desktops around the perimeter of the rooms, taking up a huge amount of space. These classrooms will be strip down to the bare walls and turned into a more multi-function room/newsroom equipped with Macs, Kamlet said.

A small conference room will be installed in the newsroom where groups of students and faculty can meet to discuss their projects.

The purpose of reconstructing these classrooms is to make it open to all school of communications students, other than just serving as a classroom, according to Kamlet.

Students have anticipated an improvement in the School of Communications building to make work easier.

“I would love to see the building made larger with more rooms for editing, writing, and all other endeavors communications students undertake,” Brian Reilly said, Quinnipiac senior film, video and interactive media major.

The construction plans does not include expanding the classrooms, Kamlet said. The rooms are not getting bigger in terms of their square footage, however there will be better use of the space.

Kamlet is currently meeting with the architect to get some ideas about how to utilize the space in the best possible way.

“This is not a done deal,” Kamlet clarified. “This really is on the drawing board at the moment. It hasn’t gone to the stage of approval, we’re still working on that.”

Kamlet and faculty will have to finalize plans with the architect, when that’s finished and there’s “a price tag,” Thompson will need to give it his stamp of approval.