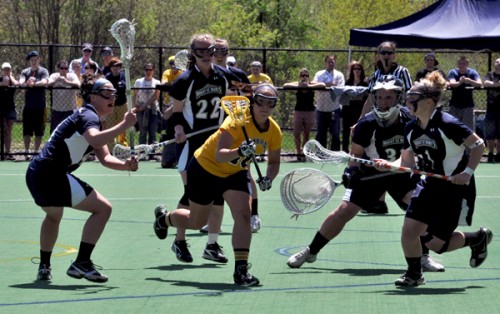 Reigning NEC Player of the Year Marissa Caroleo controls the ball in the conference championship game vs. Mount St. Mary’s last May.

A season where you go 13-5 overall, 8-1 in conference play and take home the Northeast Conference title may feel tough to repeat, yet Quinnipiac head coach Danie Caro feels differently and has sure-fire confidence in her team.

“I think that our sport lends itself to building on momentum, whether it be within the context of a single game, or during a stretch of games. When you win a couple of games in a row, your confidence skyrockets, and that usually allows you to play at a very high level, which results in even more wins,” Caro said. “Our goal is always to peak during conference play so we can be at our absolute best at the end of the season when we enter post-season play.”

The Bobcats’ season didn’t start off as planned in 2011, as Quinnipiac suffered three straight losses to start off the year, all of which by at least five goals.

“I think the circumstances of our preseason last year contributed to our slow start,” Caro said. “We had significant weather issues that prevented us from practicing outside, several injuries to key players and a back and forth competition for the starting [goalkeeper] position, all of which contributed to uncertainty and lack of confidence for us as a team.” 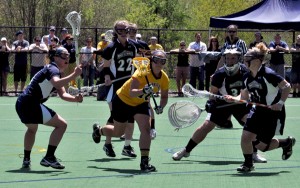 [/media-credit]The Bobcats soon righted their ship in 2011, however, winning their next six games. They were able to rattle off another big win streak after an April 1 loss to Bryant, this one seven games, before losing to Navy in the NCAA play-in game.

This year, Quinnipiac aims to repeat its championship season, with eight new incoming freshmen and 2011 NEC Player of the Year Marissa Caroleo, who hit the back of the net 53 times in 2011, returning for her senior year.

“I have a great group of attackers to work with on offense. We work really well together and they always manage to get me the ball at the right time to finish the play,” Caroleo said. “Hopefully, regardless of who it is that is scoring the goals, we can continue to find those connections and put points on the board for Quinnipiac.”

Devon Gibney, the 2011 NEC Tournament MVP, returns after she led the team in draw controls and was second in caused turnovers. Senior Kim Davis recorded a team-high 40 ground balls last season and junior Sarah Allen was the conference’s leader in assists last year. Goaltender Noelle Martello, who made 174 saves and won 12 games last year, returns for her senior season.

This year, the Bobcats began their season with an 18-6 loss to UConn on Saturday. Their next matchup isn’t until March 12 when they fly to Colorado for a pair of non-conference contests against St. Mary’s and University of Denver March 15.

From there they square off at Brown March 18, and return to Hamden for their first home game vs. Vermont on March 21. From that point, nine of the next 10 games are conference matches, with five of them taking place at home, including three straight conference home matchups against Fairfield, Central Connecticut and Bryant to close out the season.

Despite the Bobcats’ first loss of the season in their opener, Quinnipiac remains optimistic at hoisting another NEC trophy come May.

“Of course another NEC championship would be a great accomplishment this season. But I think that this year’s team is capable of a lot more than that,” Caroleo said. “I am hoping that in my final year at Quinnipiac, I can see my team make it to the NCAA tournament.”