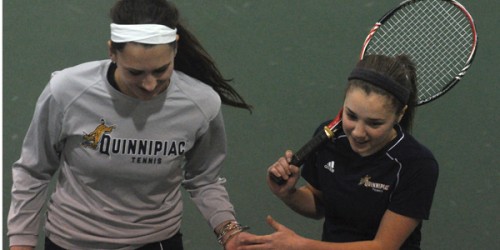 Walk into Michelle Dassa’s dorm room, and nothing stands out as different from a typical college girl. A photo of Justin Bieber peers over her desk, a New York Jets banner near it as well. Pictures from high school and her friends from home grace the wall, with some sports equipment on the ground. Above her bed hangs a poster of Michael Jackson performing several of his trademark dance moves. It also says something else.

“People would always say I was off at tennis, and someone called me it. It stuck for a little while,” she said. “Tennis is the escape of the day. Just go there and do what you have to do.”

Standing at an even 5-feet, Dassa is the shortest player on Quinnipiac’s women’s tennis squad by four inches. She has also been one of the most successful on the team, establishing herself as a starter in her first season of play at the university. For the 19-year-old Marlboro, N.J., native, tennis came naturally, but not necessarily by choice.

“My mom made me quit soccer when I was 12, so I took on tennis. I just kind of started hitting the ball around,” she said.

Within a few years, Dassa became heavily involved in the sport and took her skills to the courts of Marlboro High School. There, she helped lead the Mustangs to four A-North Conference Championships while managing three individual championships with an 87-10 overall record. It was during this time that Dassa would meet a close friend. And a future teammate.

Jackie Raynor, a resident of Garden City, N.Y., started playing tennis when she was 10 and has not looked back since. Entering Quinnipiac ranked 101st nationally, the 5-foot-10 star has established herself as a force to be reckoned with in her short time at the school. Raynor and Dassa began playing together after meeting through the United States Tennis Association in high school and established a close friendship.

“We don’t take each other seriously on the court,” Raynor said. “We just laugh and have to try to keep our composure.”

Soon after gaining experience playing together, Quinnipiac tennis coach Mike Quitko and assistant coach Paula Miller began recruiting the two girls. “Q,” as referred to by the team, met them both at the annual Tim Donovan Showcase. After pursuing both of them, Dassa and Raynor found their way to Quinnipiac and instantly tried convincing him to allow them to play doubles.

“They came to me and asked to play doubles together. I told them no. One’s tall, one’s short,” Quitko said. “Eventually I told them I’d take a look and make a decision best for the team. They then went out and won a tournament.”

So far, the decision to pair the two has proved successful. The Bobcats entered the season as the Northeast Conference favorites and achieved their first victory of the season Sunday against Saint Francis (Pa). Dassa and Raynor played as the No. 1 doubles squad and defeated their opponents 8-6. Quinnipiac went on to win the event 7-0.

“We mesh very well. We compliment each other. We know where we’re gonna go, where we’re gonna be,” Dassa said about playing with Raynor. “If I’m at the baseline, I just have to set it up and go. If she’s serving, I’ll just poach because I know she’ll pick me up.”

Not surprisingly, Raynor shares the same sentiments and sees Dassa for much more than a player.

“She’s one of my best friends. It’s a good dynamic, but we have to be serious, and I think the sky is the limit for her,” Raynor said.

While such a compliment may be expected from a friend, Quitko also believes in Dassa’s potential in the program, despite her size.

“You look at her and see the smile that resonates across her face and you can tell she’s going to be a great leader,” Quitko said. “I think she could accomplish a lot of things and end up in the Hall of Fame here even.”

Quitko believes Dassa has a combination of leadership qualities and talent that can separate her from the average tennis player.

“She has guts. That kid has great legs, she moves rapidly,” he said. “For somebody her size and stature she should not do what she does. I say guts because I’ve seen her dive after balls on the hardcourt, and yeah, she comes up bloody.”

Dassa may be the smallest player on the team, but she also understands the she is able to combat such a setback.

“Since I’m athletic, I work more with what I have,” Dassa said. “I’m 5-feet tall, I have to work at things a little harder. I have to play like I’m 6-feet tall, which makes me more into it.”

As a freshman, Dassa has already made an impact in her short time on the squad. She, along with Raynor and the four other freshmen, provide a positive outlook for Quinnipiac tennis going forward.

“We can only go up from here,” Dassa said. “I don’t see why this team can’t win at least two NEC [titles].”

Dassa may be tiny. She may be just a freshman. To her teammates and her coach, though, she’s a star with a tremendous amount of potential. Dassa, however, believes there is one thing she’s not.

“I’m no Jackie Raynor,” she said with a laugh.