Fishing for a future in film 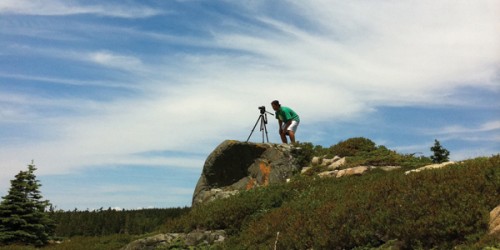 This summer, while filming his first documentary, Austin Hopkins tested the waters — literally and metaphorically.

“I have never done anything like this before,” said Hopkins, a junior film, video and interactive media major. “This time last year I had been watching a lot of documentaries on Netflix and I was like, ‘this could be fun.’”

Hopkins’ “fun” turned into a serious matter when he moved to Maine for the summer with the goal to film a documentary on the lobster fishing industry.

Entitled, “Born Into It,” Hopkins originally planned to capture a ‘day in the life’ of a lobster fisher, and how they are literally “born into” the trade — but his plan evolved into something greater when he began his interviews. 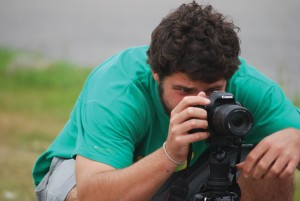 [/media-credit]Austin Hopkins spent the summer in Maine filming a documentary on lobster fishing, a massive one-man effort that got him credit from the School of Communications and an idea to pitch a four-part series to PBS.

“It gets into rules and regulations that the Maine government and the Federal government have been making over the past few years,” Hopkins said. “Its really taken a toll on some of these fisherman because they’re constantly having to buy new equipment so they can keep their license. They’re struggling to keep up with the rules and regulations, but they wouldn’t give it up for the world.”

This two-month endeavor required a lot of hard work from Hopkins. With help from a friend who conducted the interviews, he remained behind the camera covering the many technical aspects of filmmaking. Hopkins said working as a one-man crew was a frustrating aspect of the documentary making process.

“I was pretty much by myself, normally when filmmakers are making a film you have a crew and you have people to do designated things like set up lights and set up audio,” he said.

Along with the production knowledge he gained in his FVI classes, Hopkins had an esteemed mentor during the time he was shooting.

Liam O’Brien, chairperson of the FVI department and documentary filmmaker, offered Hopkins tips and advice throughout the summer.

“Austin came to me with a really good idea, and he did a really bang out job,” said O’Brien, who said Hopkins did this project through a credited independent study program, which allowed him to use the School of Communications’ equipment.

O’Brien also gave him the idea to expand this documentary, tackling fishing villages across the country. He also suggested Hopkins pitch the idea of a four-part series to PBS.

“I’m proud of him and I think he’s starting to do something that may turn into something sailable and broadcastable in the future,” O’Brien said.

The success of Hopkins’ film is also contributed to the people he met and built relationships with throughout the summer. Although he ran into “big, burley,” fisherman who did not want to speak to him, “The people I did interview for the film, they were just the nicest people I have ever met,” he said.

One person Hopkins still keeps in touch with is Megan Moshier, the owner of Elsa’s Inn on the Harbor, in Prospect Harbor, Maine. Hopkins interviewed her brother and a 10-year-old, both involved in lobster fishing.

“He went above and beyond and did the absolute best that he could,” Moshier said. “He put a lot of work into it.”

“I think it’s a good representation of our town,” Moshier said. “Lobster fishing is a big industry here.”

According to Moshier, the documentary became well-received by the town.

“Once they found out what it was they thought it was great,” she said.

Hopkins said he is proud of the work that he’s done, and is currently researching other fishing areas around the country to film. After entering his documentary into three different film festivals, Hopkins hopes to see something great come from “Born Into It.”

“He’s got a good eye and a good ear, and he listens well and he’s learning to develop a good story structure,” said O’Brien, who hopes that Hopkins will keep working with this project and make it something even bigger then he originally imagined.

“It was a lot of work, I didn’t really know what I was getting into, but I loved every single day of of it,” Hopkin’s said. “It was a very good experience and I really hope that I can do some more projects like that in the future.”