This was not only their first joint event, but also the first official event for either group. Both the MSA and SAS were formed in December, after gaining approval from the university. 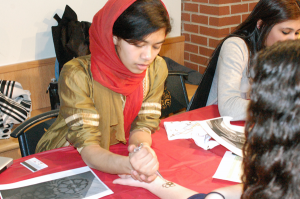 [/media-credit]Pooja Bhavsar, junior and president of the SAS, has wanted to start a group representing her culture since she was a freshman.

“We felt like this was a part of our lives that was lacking on campus,” Bhavsar said. “It took a while to get it started, but the end result paid off.”

Abeeda Mehwash, president of the MSA, said joining with the SAS would not only make the event a success, but a great way to promote the organizations.

“We need to expand our groups and reach out to the campus,” Mehwash said. “Henna is part of both of our cultures, so we thought it would be nice to join together.”

A professional henna artist was available to draw the delicately designed tattoos, which last up to six weeks.

Students who waited on line for the tattoos helped themselves to samosas, pyramid-shaped pastries that can be stuffed with potatoes, peas or other foods. Attendees also enjoyed traditional Lassi drinks, made with mango and yogurt.

About 60 students attended the event, which was more than many of the group members had anticipated.

“I’m very impressed with the turnout,” said Mohammed Bey, director for multicultural education at Quinnipiac. “For right now, we’re taking things as they come. The students are just celebrating and sharing their culture with the community. It’s definitely needed on campus.”

Nicolas Carrasco, a professor of biochemistry, advises the two groups along with philosophy and political science professor Stephen Balkaran. Both advisers were also pleased with the positive energy at the event.

“This is a great opportunity for the students, and adds volume to the community,” Carrasco said. “[The organizations] worked really hard to get this group going, and will continue their efforts.”

With its first event such a success, SAS can begin planning future events such as “Holi Glow,” modeled after Dayglow with a religious aspect, on March 25.

“Holi Glow is going to be so much fun,” Bhavsar said. “It will be outside, and involves throwing of colored powder. There is a religious aspect to it, but it’s just going to be a crazy time. Everyone is welcomed.”