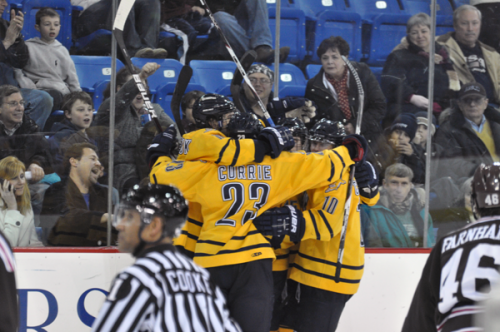 On a night that was reserved for the seniors, a line made of underclassmen led the way. The combination of Matthew Peca, Kellen Jones, and Connor Jones combined to score three goals and pick up seven assists in the Bobcats 4-1 win over Brown.

“They were excellent tonight,” Head Coach Rand Pecknold said. “I thought they had a lot of jump. They were making plays. I thought Matthew Peca was the best player on the ice tonight. He was just great. Probably one of the best game he’s played all year.” 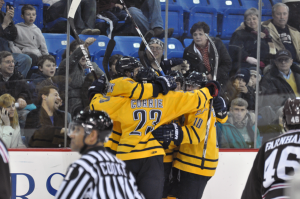 [/media-credit]The trio did most of their damage in the third period. After a disagreement with the referees that that saw Brown coach Brendan Whittet get ejected from the game, the Bobcats had an extended five-on-three powerplay.

The Bobcats wasted not time. Just 24 seconds into the powerplay, Kellen Jones scored his first goal to give the Bobcats the lead. Kellen received a pass from Connor a one-timed a shot from the right faceoff dot.

“Just a great play by Connor to get me the puck and I squeezed it by the goalie,” Kellen said.

Kellen returned the favor just under a minute later when he set Connor up for a one-timer from the bottom of the right faceoff circle.

“They were getting tired but I figured with the way they were playing, let’s leave those five on the ice,” Pecknold said. “And they ripped another one.”

On another powerplay just under five minutes later, Kellen struck again and sealed the win. His blast from the point beat Brown goalie Marco De Filippo for a 4-1 lead.

“I just tried to get the puck to net and there was a great screen in front,” Kellen said. “So I didn’t have to do much work for that one.”

The Bobcats tied it just under five minutes later on Zach Tolkinen’s third goal of the season. Kellen Jones won the faceoff in the Brown zone to Peca. Peca skated towards the net before veering off towards the side boards. From there he sent a pass towards the slot where Kellen left a drop pass for Tolkinen in the slot. Tolkinen fired a wrister toward net that beat De Filippo.

“Our big thing tonight was to try to get more traffic in front of the goal,” Pecknold said. “I didn’t think we were great at it. But for three of the four goals we did.”

From there the Peca-Connor-Kellen line took over.

With the win, the Bobcats are now guaranteed home ice for the first round of the playoffs. But they could also get a first round bye pending the outcomes of tomorrow’s games.