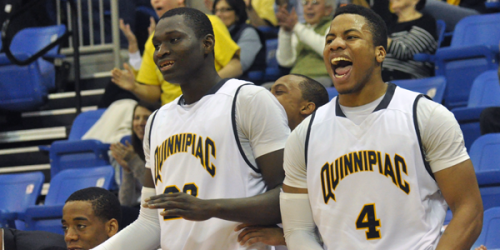 Quinnipiac’s offense made their first 12 field goals to start the second half and the Bobcats used a huge scoring run to run past Saint Francis (Pa.), 77-44, Thursday at TD Bank Sports Center.

Ike Azotam dropped 18 points on the day, and also grabbed seven boards, while Dave Johnson knocked down 19 points, a career high. Johnson also shot 3 for 4 from beyond the arc. 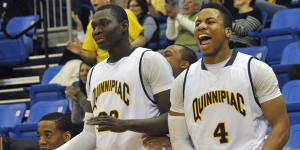 “The last couple of games we’ve been finding each other, we’ve been building chemistry on offense,” Azotam said. “We’ve been working on it in practice more, and it’s all about being confident out there and knowing which shots to take.”

The Bobcats slowly began to pad their lead, taking a 35-20, 15-point lead going into the break. Garvey Young assisted on the defensive side of the ball, grabbing three of his four steals in the first half.

Quinnipiac (16-12, 9-8 NEC) came out of the gate blistering into the second half, hitting 12 straight shots from the beginning of the half, by Azotam, James Johnson, Dave Johnson, Ousmane Drame and Zaid Hearst. Quinnipiac also knocked down 21 points within the first 6:53 of the second half, which was good for a 30-point lead over the Red Flash, 58-28.

“At halftime we really emphasized not letting up defensively, and improving on our lead,” Dave Johnson said. “In practice we really work hard on defense, and try to keep their field-goal percentages down.”

The offense didn’t stop there, as the Bobcats continued to add to the lead, at one point forcing Saint Francis (6-22, 5-12 NEC) into a 38-point deficit, 69-31. Quinnipiac added eight more points over the final 8:21 to finish off the Red Flash.

“We defended very well, we rebounded well, and tonight we played very good offense too,” Quinnipiac head coach Tom Moore said. “I do think one of the biggest differences was the time to prepare for the match-up. Last time we played them, we never really found a rhythm. Tonight the kids seemed more comfortable with how we’re going to answer that match-up.”

The Bobcats shot 58.6 percent from the field, and 40 percent from beyond the arc, while Saint Francis shot 38.3 and just 11.1 percent from 3-point range. James Johnson also added eight assists on the day.

Quinnipiac will have a day off before taking on conference rival, Robert Morris at home at 11 a.m.

“We really hope it’s a packed house, it will get our guys even more excited,” Moore said. “You’ll really see our guys have a different bounce in their step, and the students have no idea how much they can just get us over the hump.”