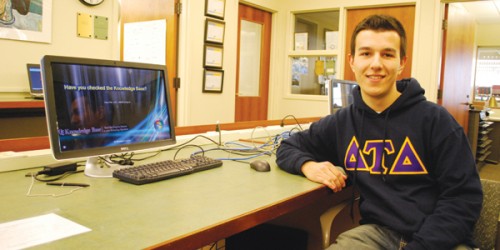 Adnan Babaic was born in Bosnia and, as a 1-year-old, barely survived an attack before his family moved to America.

It was April 1992 in Sarajevo, Bosnia. People ran frantically around the bus terminal desperate to find a way out of the city. Women begged to get on the bus without tickets. Mirsada Babaic stood firm as people pushed and shoved in line. She left without her husband because Bosnian men were taken off the buses and shot at various checkpoints. She clutched onto her 1-year-old son. She held German Marks she saved after selling her belongings. No one accepted Bosnian money. Mirsada spotted another booth opening. She ran faster than she ever had in her life. If only she and her son could catch the last bus out, she thought.

“I packed my whole life in a suitcase with a baby in hand,” Mirsada told her now 21-year-old son Adnan, a junior at Quinnipiac. He was that 1-year-old toddler during the outbreak of the Bosnian War in the spring of 1992.

“I just feel so lucky to be alive,” Babaic said. “That little baby that my mom clenched onto could have easily not made it to Germany, much less America.” 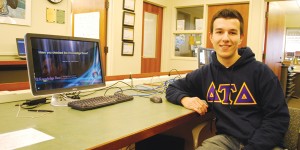 [/media-credit]Adnan Babaic was born in Bosnia and, as a 1-year-old, barely survived an attack before his family moved to America.

In what Adnan describes as a miracle, both he and his parents fled to Munich, Germany, where they stayed with his grandmother. His father joined them one month after his family left. Luckily, his father’s friend sneaked him into one of the last planes leaving Sarajevo.

The Bosnian War erupted one year after Croatia seceded from former Yugoslavia to counter the Serbian extremists’ plan for a “Greater Serbia.” In March 1992, Bosnian Muslims and Croats, also fearing a Greater Serbia, voted for Bosnian independence. Serbians depicted Muslims as extremist fundamentalists, causing many Bosnian Serbs to support plans for “ethnic cleansing,” or genocide. Ethnic groups were pitted against each other, thus setting the stage for war.

On April 6, 1992, Bosnian Serbs began the siege of Sarajevo, the capital of Bosnia and Babaic’s home. The city was cut off from food, water, electricity and communication.

Babaic’s mother told him that she still turned off their lights because of snipers in the village when power was provided for a brief period of time.

After the family left, Babaic spent the next five years in Germany living in an apartment above his grandparents. His grandfather worked for the owner of a construction company that not only employed Babaic’s father, but also let them stay in his apartment for free.

Because Germans were fearful of refugees stealing their jobs, Babaic’s parents had to take entry-level positions. His mother worked as a maid and his father left behind his position as a German translator for an engine manufacturing company to do construction.

Out of the more than 2 million people displaced due to the Bosnian War, approximately 320,000 settled in Germany. Once the war ended in 1995, Germany decided to send the refugees back home.

However, for Babaic’s parents, returning home was not an option.

“My mom told me that there was nothing left in Bosnia. We would have gone back to a house that was destroyed, where there was no economy. There was no food. Everything was destroyed,” Babaic said. “It was either go back or make a better life for all of us. It sounds clichéd but it’s true.”

According to the Center for Balkan Development, 60 percent of all houses in Bosnia, half of the schools and a third of the hospitals were damaged or destroyed during the war.

In August 1997, Babaic and his family journeyed to the United States. His aunt and uncle lived in Queens, N.Y., where 15,000 Bosnian refugees settled. They were able to sponsor Babaic’s family for immigration. Otherwise, they would not have been able to emigrate, according to Babaic.

“Leaving Germany was probably one of the saddest times. I was really close with my grandparents and I didn’t know if I was coming back,” he said.

Babaic’s family spent one night in Queens. The next day they packed up and left for Milford where his aunt and uncle were moving.

For about six months, Babaic lived with seven family members in one apartment: his younger sister Irma, his parents, his aunt and uncle and their two children. Milford is where Babaic entered first grade.

Babaic’s father worked at a gas station and his mother manufactured circuit boards for phones in order to save money. They permanently settled in Hamden where Adnan entered the fifth grade.

Currently, Babaic is studying Computer Information Systems at Quinnipiac. He is also the president of the International Business Society on campus, as well as vice president of public relations for his fraternity, Delta Tau Delta, which is evidenced by his brown pullover bearing the Greek letters.

Though Babaic has footprints in multiple places across the globe, he considers America his home.

“The only thing that makes us different is that we were born [in Bosnia]. But technically all Americans are immigrants unless you’re Native American,” he said.

Babaic also mentioned that he and his father had discussed changing his name to something more Americanized, such as Adam.

Babaic said that because his name is Middle Eastern, his father worries about the negative stigma that comes along with that after 9/11. Changing his name would also make daily life easier, for many are unfamiliar with “Adnan.”

But the idea was short-lived.

“Sure, the name doesn’t represent the American side of me. But I like my name,” Babaic said.

Since immigrating to the U.S., Babaic has visited both Bosnia and Germany on several occasions. For him, Munich is his favorite place to return to see his grandmother. His eyes lit up as he described their reunions.

“I don’t know how to explain our relationship, but she’s so loving, kind of like my second mother,” Babaic said. “Her face when I come back is crazy. It’s like I’m president of the U.S. or something.”

Babaic’s friend since the fifth grade, Rutu Patel, is also a junior at Quinnipiac. She describes Babaic as extremely genuine and caring, especially regarding his family.

She also said how smart he is. In eighth grade, both were nominated for most likely to succeed.

“I’m sure moving into so many different settings was a difficult thing to do. For him to be able to embrace and make the best of every situation speaks volumes about his character,” Ducos said.

Babaic recognizes this quality in himself, as well.

“Going through that, especially when you are little, teaches you that worse things can happen in life,” Babaic said. “Just take every day and appreciate what you have, especially living here and being able to go to Quinnipiac.”

His experiences have contributed to his spontaneous nature, as well as his desire to travel, Babaic said. He plans to enroll in a QU301 class that travels to Nicaragua.