The Quinnipiac women’s basketball team has been something special all year long. The Bobcats have won 11 of their last 12 games, have the nation’s Divison I leader in steals per game and a freshman who averages almost 11 points per game like it’s no one’s business.

And that is why they currently stand tied with Sacred Heart atop the Northeast Conference standings.

The Bobcats (21-6, 13-3 NEC) square off against Robert Morris Saturday at the TD Bank Sports Center before hosting Saint Francis (Pa.) on Monday as the season finale.

“We’re happy to be at home for three out of our last four games, we’re a game out and we can’t stumble, we’re still playing for that one seed,” Quinnipiac head coach Tricia Fabbri said. “Every game means so much when we’re trying to win our conference, get that regular season title and host three games for a championship.” 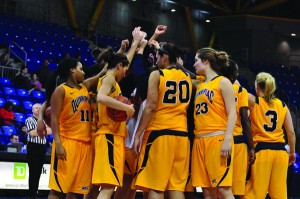 [/media-credit]The Quinnipiac women’s basketball team finds itself tied atop the NEC with Sacred Heart sporting a 13-3 conference record. The Bobcats have won 11 of their last 12 games, including a 37-point victory over Sacred Heart on Jan. 21.

One of the biggest places the Bobcats have had success has been on the road, where they’ve established an 12-2 record, including rattling off a four-game win streak against Saint Francis (Pa.), Robert Morris, Bryant and Sacred Heart in January.

“Every time we get on the road and stay in those hotels, we’ve been really successful. I think it allows the kids who enjoy each other’s company to be with each other,” Fabbri said. “There’s less of a distraction when you’re all together, it just became part of our routine early in the season.”

Fabbri attributes the team’s road success to the confidence they’ve played with, believing that it’s something earned with effort and feeling good about the game you’re playing.

It started at the beginning of the season, when Quinnipiac won two games vs. Minnesota and Saint Mary’s in California in November.

“This team played from the first official workout with a lot of confidence in their own abilities,” Fabbri said. “When we got that first win under our belt we were really able to exhale, and when we headed out west beat Minnesota at the buzzer, it was a tremendous confidence builder for a really young team.”

Quinnipiac wouldn’t be where they are without productive defense and strong offense, both of which have been anchored by junior Felicia Barron and freshman Jasmine Martin.

Barron is currently leading the country with 4.3 steals per game, and has notched 115 this season. Barron also set the program record for most steals in one game with 12 on Dec. 3 versus Bryant.

“After I got my braces off my knees from tearing both of my ACL’s I felt faster and able to move laterally better,” said Barron, who is third in the NEC with 17.1 points per game. “I have long arms and use anticipation to go out and get those steals.”

Quinnipiac leads the NEC with 11 steals per game as a team, and the Bobcats have allowed fewer than 50 points on four separate occasions. They held Sacred Heart, who averages more than 65 points per game, to 34 points in a Jan. 23 game.

“We just have to keep playing hard every game,” Barron said. “Our defense is our key to our victories, and if our defense is strong for these last six or seven games, we can make it all the way.”

On the offensive side of the ball, Martin has grabbed the spotlight throughout her freshman year, notching 10.9 points per game and 293 total points on the season, second on the team.

“It’s something that I take pride in,” Martin said. “I wanted to come somewhere where I knew I’d be able to play and make an impact, and I’m really happy I’ve been given that chance.”

Martin said the team’s road to the championship won’t be easy.

“It’s going to be a challenge [in the playoffs],” Martin said. “We gotta keep working hard and go out and play every game. Everything has to be at it’s sharpest, because that’s when it really counts.”