Quinnipiac looks for redemption vs. Colonials

Imagine a fire that continues to die and retreat into strands of smoke as the last few pieces of kindling burn slowly. Now imagine the fire and its wild, uncontrollable nature after dumping gasoline on the growing flames.

In the last three years, Quinnipiac and Robert Morris have escalated their rivalry from a gritty conference matchup into a heated Shakespearean-esque feud. The two teams have upped the ante by meeting three straight years in the later rounds of the Northeast Conference tournament. Unfortunately for the Bobcats, they have drawn the short straw on both occasions. 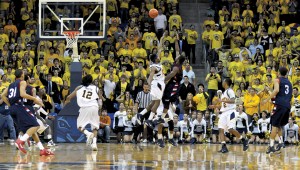 Flashback to 2010, thousands of blue and yellow-clad mourners exited the TD Bank Sports Center with expressions of devastation and disappointment flushed across their faces. The Bobcat faithful had just witnessed a heart-wrenching two-point loss to the Colonials in the NEC championship game.

A year later, the semifinal meeting between the two teams was advertised like a classic heavyweight bout between prizefighters. Back at the Bank, Quinnipiac was out for revenge as Robert Morris was looking to start a trend of exerting its dominance over the Bobcats in the postseason.

At the sound of the final buzzer the Colonials were the last ones standing after KO’ing the Bobcats in the final minute once again. The NCAA Tournament remains an exclusive night club and once again, Quinnipiac was left waiting in line against the velvet rope.

“In this league it’s just about trying to get that NEC ring and they have two of them,” Quinnipiac head coach Tom Moore said about Robert Morris.

In the first meeting, the game was locked up at 48 with 1:18 remaining until Robert Morris’s Velton Jones knocked down a jumper to break the tie. Two more at the line from the Colonials put the game out of reach with seven seconds remaining, as Robert Morris won 52-50.

The second time around, the Bobcats were up by one, 62-61, with 57 seconds left after Dave Johnson hit a pair from the free-throw line. Robert Morris tied it up on a free throw and then took the lead with 4.3 seconds left on a Jones runner, making it a 64-62 game. James Johnson bobbled the inbound pass and slipped on a potential game-winning 3-pointer as time expired.

“In the two tournament games, they have amped it up one more possession then we have,” Moore said. “I think we’ve been good in both of those games but they’ve been one play better in both games.”

The Bobcats have won three of the last five matchups with Robert Morris, but all three of their victories have come in the regular season. The two losses came when the lights were brightest and everything was on the line. It would be easy to get discouraged by the losses but the Bobcats are using it to fuel the fire.

“Since my freshman year we have had the score (52-50) on the board (in the locker room), us losing by two points,” junior forward Jamee Jackson said. “It remains up there so every time we play them it’s in the front of our head.”

Another thing the Bobcats will have to think about when the two teams meet for the second time this year is putting the clamps down on Jones. Jones, a junior, is putting up more than 16 points per game this season and has been the man down the stretch in both of Robert Morris’s postseason wins over Quinnipiac.

“The louder the opposing crowd is, the bigger the spot, the more focused (Jones) is,” Moore said. “He got a lot of confidence as a freshman when he came into this league and was in big games and flourished in big games.”

Whoever has the edge in the matchup of Johnson and Jones will likely dictate the flow of the game. Quinnipiac does a great job of controlling the boards and working for second-chance points but the Bobcats offense comes and goes with Johnson’s success on the perimeter.

“James Johnson’s leadership is good for this year’s team because we’re so young,” Moore said. “I think they do feed off of him making shots. I think they get confidence as a team when he makes threes because he is clearly our leader.”

In Quinnipiac’s last three regular season wins over Robert Morris, James Johnson is averaging just over 29 points per game. He is shooting 57 percent from the field and a whopping 64 percent from beyond the arc. On Jan. 27, 2011, James Johnson erupted with his highest scoring output of his career, exploding for 38 points as the Bobcats beat the Colonials 69-61.

However, it’s been a tale of two seasons for James Johnson. In the two postseason losses, he is averaging just nine points and is shooting a pedestrian 24 percent from the floor.

The two teams will meet in the last game of the regular season, which will have seeding implications for the NEC tournament. Once the tournament begins, these two teams have a way of finding each other one way or another.