Sept. 11, 2001 was a tragic day for America. We all remember that fateful time when our country was under attack from terrorists from the extremist organization al-Qaeda. Countless lives were lost as four passenger jets were hijacked. Two planes were hijacked and intentionally crashed into the North and South Towers of the World Trade Center in Lower Manhattan.

The 9/11 terrorist attacks on the World Trade Center has special significance for the Quinnipiac University community. Joseph Mascali, a firefighter for Staten Island N.Y. Engine Company 5 lost his life battling through the aftermath of 9/11. Mascali lost his life trying to save lives after the destruction of the twin towers on that catastrophic day. Mascali was the father of Quinnipiac alumni Chris Mascali ‘05, Jennifer Mascali ‘02 and current sophomore Katie Mascali, as well as the husband of Lori Mascali. 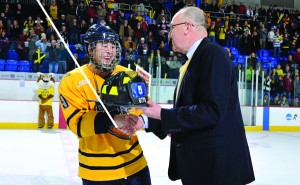 [/media-credit]Quinnipiac Director of Athletics and Recreation Jack McDonald presents the Heroes Hat to forward Brandon Wong after the Bobcats beat Yale, 4-3, on Feb. 27, 2010, the last time Quinnipiac has won the Heroes Hat.

Soon after the Mascali family lost its father, husband and loving member of the Quinnipiac community, Quinnipiac Director of Athletics and Recreation Jack McDonald established the Heroes Hat. This honor commemorates the lives lost in the World Trade Center attacks. It also remembers the bravery, heroism and courage of Joseph Mascali and countless others who went above and beyond the call of duty by saving numerous lives from the death and destruction of the twin tower attacks.

“After Sept. 11, seeing as the school became a source of comfort for me and my family was definitely an awesome thing and this just made me realize this is where I am supposed to be and this is where my dad would want me to be,” Katie Mascali said last year in an interview with Comcast Sports Net.

The Heroes Hat will will honor the 10-year anniversary of the attacks on Saturday. The trophy was originally presented to the winner of the Quinnipiac and UConn season series during its first four years from the 2001-02 season to the 2004-05 season. The award was not distributed in the 2005-06 campaign, as Quinnipiac was making the switch from the Atlantic Hockey conference to the Eastern Collegiate Athletic Conference.

The Heroes Hat was reborn the following season as Quinnipiac and Yale renewed the tradition, bringing two ECAC Hockey teams and rivals together.

“It is our hope that the Heroes Hat be a Connecticut sports tribute to the many heroes and their families involved in the September 11th tragedy,” Quinnipiac head coach Rand Pecknold said during the inauguration of the award.

Overall, Quinnipiac has won the Heroes Hat nine out of the 10 seasons it has been awarded, with the only loss coming last season in a 6-1 Yale victory. This year’s meeting is the the sixth time Quinnipiac and Yale will play for the prestigious award.

The Heroes Hat has significance for the Yale community as well.

“We were all deeply touched and truly inspired by the heroism of so many first responders on Sept. 11 and the days following the brutal attack,” Yale head coach Keith Allain said. “It is fitting that Yale University and Quinnipiac University honor the heroism and sacrifice of Joseph Mascali with the playing of this game.”

But for Pecknold, the award is more than a symbol of victory; it is a reminder of how precious love is.

Pecknold’s wife, Nikki, a Yale graduate, was working in the World Trade Center and was supposed to have training on the 35th floor that day. He didn’t know if his wife was going to make it out alive after seeing the towers collapse. It was a moment of uncertainty and it truly sticks out in Pecknold’s mind.

“I vividly remember that day and the chaos,” Pecknold said. “I had to drive down that night and pick her up. She eventually got out and went to Jersey City. I had to go around the city and pick her up because you couldn’t go through the city. That does add a little something for me but I think it’s a nice tribute.”

The Heroes Hat is not only special to the Mascali family and Pecknold, but to the players who are competing on the ice to try and represent those who died in 9/11 as best as possible and bring the award back to their community.

“It’s a great event,” Zurevinski said. “It really brings the community together and the school of Quinnipiac together. It’s real exciting for our team and everyone involved with our organization.”

After losing the Heroes Hat for the first time last year, the Bobcats are looking to bring the trophy back to their locker room.

“We want to get the Heroes Hat back. We had the Heroes Hat forever, we never lost it. Last year was the first time we lost it. It’s been nine years. We won it when it was with UConn and now with Yale. That’s big for us,” Pecknold said. “The incentive is always there. It’s there whether we have it or we don’t have it. We want to win that game.”

Zurevinski said that one of the best things about the rivalry game is the packed crowd.

“It’s a lot of fun seeing the rink packed and seeing all the students out and how the community comes out and supports us,” Zurevinski said. “That’s something you don’t really get to be a part of all the time. It’s an honor to play for and I will definitely miss it.”

For Zurevinski, a special memory from the rivalry was his sophomore season when the team won 4-3.

“It was a pretty back and forth game. We were down 3-2 at one point and maybe even 3-1,” Zurevinski said. “I think it really brought the school together and everyone enjoyed beating Yale especially with how close we are together. It was a great memory.”

The Bobcats said the Heroes Hat belongs with them, and they will try to reclaim it Saturday at 7 p.m.

“Obviously we want to beat Yale, but we want to keep that Heroes Hat in our dressing room and we feel that it kind of belongs in our community,” Zurevinski said. “We take pride in it and we always have a couple of families come and talk to us before and after the game. So seeing the emotions that they have and following the game, it gets you more pumped up and you want it just that much more.”