For the second time in as many weeks, a member of the Boston Globe was spotted on the Quinnipiac campus.

On Feb. 11, Matt Pepin, the sports editor from Boston.com, held a workshop for students interested in sports journalism.

On Thursday, Bob Ryan, longtime sports columnist for the Boston Globe was on the York Hill campus at the TD Bank Sports Center. 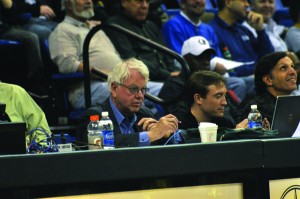 This was Ryan’s first visit to Quinnipiac and before the game, he was given a tour of the TD Bank Sports Center by Director of Athletics and Recreation Jack McDonald.

“This facility, its reputation is very vast. If you tell people that you are going to Quinnipiac, they say ‘Woo! Wait till you see it.’ I know I’ve been hearing about this place since they opened it,” Ryan said. “It’s got a very good reputation and frankly it’s the best facility I’ve seen in New England.”

Ryan sat on press row to watch the Quinnipiac men’s basketball team take on St. Francis (N.Y.) on Thursday night. Although Ryan was not covering a game story for the Globe, he was focused on his new preview for the Globe.

“I’m doing a project story in conjunction with the fact that the NCAA tournament is coming to Boston this year and so the Globe will be doing a preview section and feature stories on the idea,” Ryan said.

His plan was to visit every school in the New England area and see at least one basketball game from each of the 21 Division I schools, and Quinnipiac was the last stop on Ryan’s list.

His article is expected to be released in late March before the opening round of the NCAA tournament.

“I call them (games like this) ‘Sisyphus’ games. You’re pushing that rock up the hill and every time you get up, it comes rolling back up on you,” Ryan said. “You never get over the hill, it’s just one of those types of games. Usually once a year you get a game like this.”

Aside from Quinnipiac, Ryan saw schools in other conferences besides the Northeast Conference such as the American East, Big East and Ivy League.

“I’ve seen the best and the worst. I’ve seen Syracuse when they were ranked No. 1 and undefeated, I’ve also seen the team that Jeff Sagarin ranked worst in the country, Binghamton. So I’ve seen the two extremes,” Ryan said.

After writing for the Boston Globe for 44 years, Ryan plans to retire from his full-time job, but still wishes to work with them occasionally.

“I want to gain control of my life. I don’t wanna have to be responsible for anybody day after day after day after day. I want to be able to rearrange my life,” Ryan said. “Retirement is a technical term that means you are no longer an employer of a company you worked for for x amount number of years. In my case, 44. It doesn’t mean you’re not going to have an association with them. I will have an association with the Globe. But it’ll be much scaled back.”

Although he may be retiring from the Globe, he still plans to appear as a T.V. talent on shows like, “Around the Horn” and “Pardon the Interruption” for ESPN.