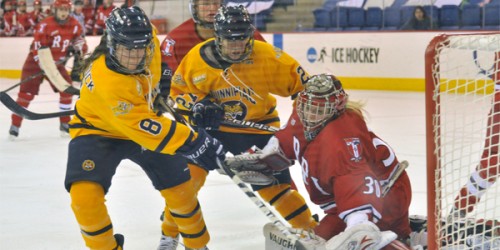 The Quinnipiac women’s ice hockey team finished their season on a high note with a 5-1 victory vs. RPI on Saturday at High Point Solutions Arena at TD Bank Sports Center and a weekend sweep.

“I think we accomplished what we needed to accomplish. We needed to come out of this weekend feeling good about how we’re playing,” Quinnipiac head coach Rick Seeley said. “I thought today was one of our best efforts all year.” 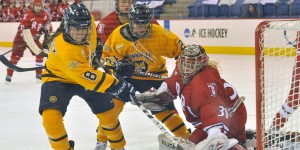 “We wanted it, we knew that we wanted to beat them. We knew that they were fighting for a playoff spot and they needed a win or tie,” assistant captain Dymarczyk said. “Our main focus was they beat us my sophomore year on a post that shouldn’t of been a goal but they did. They ended our season that year, so we really wanted to seal the door on their season and send them packing.”

After clinching the No. 6 seed in the ECAC Hockey tournament, Quinnipiac will travel to No 3 seed Clarkson for the first round.

“Sweeping this weekend really gave us a confidence booster,” Dymarczyk said. “The whole team, (Quinnipiac goalies Victoria) Vigilanti and (Chelsea) Laden in net. (It) Built the confidence and we know what we can do to build off this weekend to go into the playoffs.”

After a scoreless first period, Quinnipiac’s offensive machine began to turn its gears and succeed in what it does best. The power play.

RPI’s Toni Sanders picked up the teams third penalty of the day as she was called for a body check 6:22 into the period. Quinnipiac worked the puck in the offensive zone and Erica Uden Johansson fired a shot at Piper. The shot ricocheted off of Piper’s pads and right to Breann Frykas who found the back of the net for the 1-0 lead.

The Bobcats found themselves on another power play six minutes later as Taylor Horton was called for high-sticking. Nicole Kosta found Frykas at the left circle who sent a pass to Kelly Babstock who was waiting at the crease. Babstock missed her initial shot attempt, but the puck remained between her skates where she found it and shot it into an essentially wide open goal as Piper lost track of the puck. Quinnipiac took a 2-0 lead on its second power-play goal of the day.

Babstock struck again three minutes later as she stole the puck in her offensive zone. She then skated around the front of the crease and wristed it past Piper once she had gotten to her right side.
““That’s her bread and butter, around the net,” Seeley said. “Her hands are so quick. To pick up pucks and create that space and then make goals look easy. She had two more like that today.”

RPI (9-21-4, 6-14-2 ECAC) narrowed the deficit to two 14:28 into the third period. Eleeza Cox passed the puck from behind the net to Sanders who was at the right side of the crease. Sanders then had a backhanded one-times that found its way over the shoulder of Bobcat goalie Vigilanti.

Babstock would pick up the hat trick late in the third period on an empty-net goal. Babstock made a beautiful deke at the left circle to get past her defender for her fifth goal of the weekend.

RPI kept the net empty and Dymarczyk launched a low line drive from behind her own blue line that went 115 feet and extended the lead to 5-1.

“It has a lot more meaning to me because in my career that was the first goal I ever scored here. It was home ice, against Sacred Heart, we were up 4-1, it was the first game of the year and they pulled there goalie. It was probably around the same spot from that side on our blue line and it went right in,” Dymarczyk said. “That was my first goal here and for my last goal to be that exact same, it means a lot more to me than most people would think.”