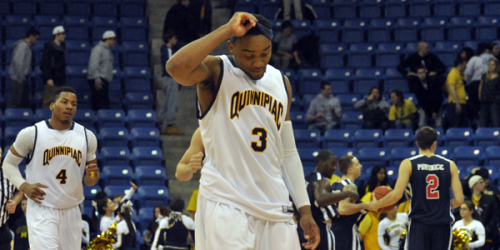 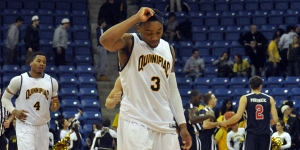 Garvey Young led the Bobcats with 14 points, while Ike Azotam recorded his 15th double-double of the season with 12 points and 15 rebounds. James Johnson chipped in with 11 points.

“I thought the team that played a little harder, a little tougher on the backboards, and a little stronger, and faster all night won,” Quinnipiac head coach Tom Moore said. “I just thought they had a little more than we did for the majority of the game.”

The Bobcats had a season-high 20 turnovers and shot 37.3 percent from the field, and travel to face conference-leading Long Island, who is undefeated at home this season, Saturday at 4:30 p.m.

The No. 2 rebounding team in the nation, Quinnipiac, only out rebounded St.Francis 42-41.

“We’ve had those shooting nights where the ball doesn’t go in the basket for us, but we usually out will the opponent on the offensive glass … but tonight it was St. Francis,” Moore said.

On the offensive end, Johnson, the team’s scoring leader, was held to four points at the end of the first half.

“I thought we got a little pouty on the offensive end and a little sulky when offensive didn’t come for us in the first half,” Moore said. “We got a little bit away from what we’ve been these past few weeks. We’ve been about defense and rebounding.”

The Bobcats only shot 2 for 12 from 3-point range for the game.

“We never stop fighting and we never stopped fighting today,” Young said. “Unfortunately the ball didn’t bounce our way. They got a couple offensive rebounds late that gave them extra possession and ultimately we weren’t able to come back.”

Quinnipiac played without Jamee Jackson due to injury. He had played three straight games before missing 10 of 12 games with a foot injury.

The Terriers never trailed, as Jalen Cannon led the team with 13 points and 19 rebounds.