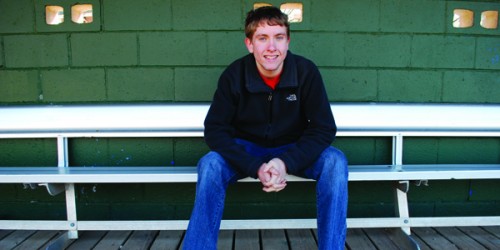 Matt Buynak is not one who struggles on the first day of classes, wondering what to use as his “interesting fact” when introducing himself to the class. The sophomore, a broadcast journalism major who dreams of one day working for ESPN, has a statistic sure to wow his peers: He has been to 26 Major League Baseball stadiums, including 20 of the current 30 ballparks. 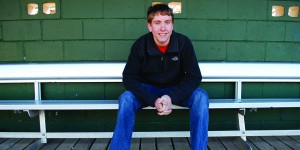 [/media-credit]“It really all started when my parents got divorced when I was younger,” Buynak said. “My school district would have a February break and an April break every year. So, I would spend February break at home with my mom, and April with my dad. And instead of just staying around town, we decided to go do stuff. And that’s when we started going on baseball trips.”

Buynak remembers a major moment in his middle school years when he went to a Yankees-Red Sox game at Fenway Park and sat 20 rows behind home plate. He went with his dad, a friend and his friend’s father. The Red Sox won, and Buynak was a fan for life.

From then on, he went to games just with his dad.

“It started as a way for the two of us to bond, as something we could do, just father and son,” said his father, Drew Buynak.

But because April is just the beginning of the baseball season, they began traveling over the summer. Once the schedules come out, Matt Buynak and his father pick the direction they want to go, and set a week when they can hit all the stadiums with the teams playing at home.

What started as day trips has extended to week or two-week long trips. They always drive.

“A couple years ago, two weeks after I actually got my license, I was out driving around Illinois as part of a trip,” Matt said.

The farthest they have ever gone round trip is out to Kansas and back, 4,000 miles round trip. They used to put the miles on a rental car, but now use his dad’s Chevy Malibu. By now, the Malibu has more than 200,000 miles on it. They’ve taken it on most of their road trips and to Florida once.

For stadiums that don’t host home games on their way through, they stop and tour the stadiums. Their trips center around baseball, but branch off to different restaurants and other places they want to visit in a city.

As for their hotel standards, “All we need are two beds, a TV and a shower, because we’re always getting in late and we’re always leaving early. So we’re usually staying at a Motel 6,” Matt said.

“I’ve always loved travelling. One of the goals in my life is to go to all 50 states, and so far this has given me a lot [31]. It’s just cool to see it all. It’s the same country and everything, but it’s all different stuff. The people are different, the food is different, the atmosphere is different,” Matt said.

Some of his memorable trips are because of the weather he sits through to see the games: from the long rain delays to a night game in Philadelphia when it reached 85 degrees.

“But they’re all memorable for different reasons,” he said.

Of all of them, Matt has visited Fenway Park the most. To name a favorite stadium, though, he says is difficult. Easier, is picking a least favorite: Oakland, because it was a football stadium also.

“So when you walk up to it, there’s nothing about it at all, it’s just a big concrete thing that’s like 40 feet high,” he said.

Long term, Matt and his father hope to reach every stadium, even though it would be costly and difficult.

“I’d like to go to all the stadiums, it’s going to be difficult with trying to string them all together. To go to Seattle to see a game, there’s nothing else out there, to see the Rockies in Colorado or to see the Diamondbacks in Arizona,” Matt said.

He would also love to attend a playoff or World Series game one day.

Drew also hopes Matt continues to do the same thing with his children, because going away on trips and being in the car for six to seven hours is the kind of thing he feels will always be remembered.


Short term, Matt has some specific trips he’d like to make. Even though his father is a Mets fan, they’ve never been to one of their games, home or away, together.

“The closer ones are stadiums you can go to anytime,” Drew said on why they pick the others.

Other than that, Matt has his sights on a trip to Texas to see the Rangers and Astros. If he goes, which he’s hoping to this spring, he’ll be adding to the collection of mini bats and balls with team logos he has from every other trip with his father.