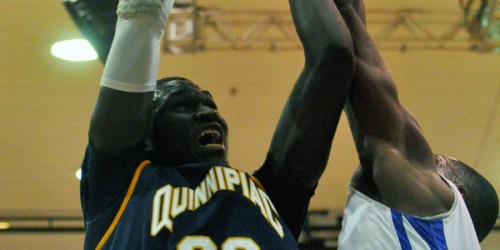 A packed crowd sat at the Detrick Gymnasium in New Britain on Sunday afternoon as the Quinnipiac Bobcats found themselves in hostile territory against Central Connecticut State. Reigning Northeast Conference Player of the Year Ken Horton squared off at half court for the opening tipoff, an electric atmosphere all around him.

Horton, senior captain of the CCSU Blue Devils, looked over at a small group of fans in yellow jerseys, who appeared to be booing him.

Except they weren’t. They were cheering for the player across from him: The man they call “Ous.”

“They love me,” Ous said with a laugh. “And I really appreciate that.” 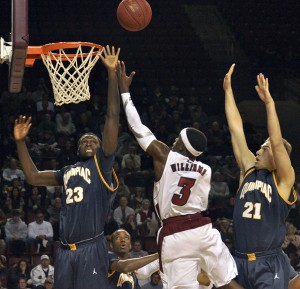 [/media-credit]Freshman forward Ousmane Drame has established himself as a fan favorite on a Bobcat squad that consists of players like James Johnson and Ike Azotam, who are averaging 16.8 and 16.2 points per game, respectively.

Through 25 games played, Drame is averaging 6.1 points per game in 19.1 minutes per contest. The 6-foot-9 forward has also become a valuable asset down low for the Bobcats, where he has tallied 7.3 rebounds per game as well.

Drame currently has 180 rebounds, which puts him in sole possession of the Quinnipiac freshman record in front of previous leader Azotam and former standout Justin Rutty, the NEC’s all-time leading rebounder. He also has 20 blocks, which is also a program record for a freshman, and has been named NEC Rookie of the Week three times this season.

But for Drame, the records and the accolades did not come overnight. It has been a long ride to where he is today.

In 2003, he relocated from Guinea, Africa to the United States, and spent the remainder of his childhood in Massachusetts. He was not initially phased by basketball, but decided to give it a try in his freshman year of high school. Drame did not receive any playing time that season, and looked to come out the next year and see the court.

Still, Drame struggled to find playing time. Just two years ago, a growth spurt allowed him to grow another four inches heading into his junior year of high school. It wasn’t until after this growth spurt that he found himself with the ball.

Drame became a full-time paint presence, even while dealing with a knee condition called Osgood-Schlatter disease, which is common among people who grow at a fast rate.

“I found myself working out a lot and trying to get better at being a scorer, being a better rebounder and body-wise, I was skinny, but I had the right people around me at the time,” he said.

As Drame progressed, he was taken in by his high school coach, Corey McCarthy.

“He’s somebody I look up to, and has helped me through everything. Not just basketball, he was there for me all the time,” Drame said.

Even with the support, working with McCarthy was far from a smooth ride.

“He was very psycho,” Drame said with a grin. “He never took anything less, he always wanted me to give the best. And sometimes, that wasn’t even enough.”

The forward also spent time playing at Marianapolis Prepatory School, aiming to further improve his skills. He averaged more than 12 points per game, but began adjusting to his new role in the paint. It was at this time that he began getting recruited by several Division I schools like Quinnipiac.

“I liked the place, the arena, the campus, and my visit was wonderful,” Drame said. “I felt like it was the right place for me.”

Coming into Quinnipiac, he began playing under the leadership of a new coach, Tom Moore. Though different in style, Drame said that Moore and McCarthy both have something in common.

“They’re both psycho!” he joked. “They just don’t want anything less than the best from me, going hard all the time, and they really push me.”

Moore has been incredibly pleased with the way Drame has played thus far this season.

“He’s very talented, and his length and his IQ and his timing are allowing him to be a real factor even though he hasn’t developed fully,” Moore said.

Even in his post-high school days, Drame often gets calls from McCarthy after games. He said that rarely does the coach have anything positive to say to him, and instead, pushes him to improve.

“He’ll call me even if I have a 14-point and 10-rebound game and he’s never satisfied,” Drame said. “He tells me I had two turnovers, and so would Coach Moore. They just want the best from me, and sometimes it gets to me, but it’s really helpful.”

Midway through this season, Drame was forced to start after fellow forward Jamee Jackson went down due to a foot injury. While starting as a freshman may be a nerve-wracking experience for some, it was not the case for No. 23.

“I knew I had to step up and hold on, do the things he was doing when he went down,” Drame said.

His presence was felt almost immediately, as he collected his first double-double against Niagara with 13 points and 10 rebounds on Dec. 22. Since, he has been a staple in the Bobcats’ lineup as the team tries to push towards an NEC Championship.

“The way we currently value defense is a good thing,” Drame said. “This is not a guarantee, but I can see us in the NCAA Tournament this year. They say we’re a young team and it’s not expected and this and that, I think that’s just all excuses.”

With promise in the future, Drame knows he’s in a good place. He also understands there is always room for improvement.

“I have to make smarter decisions on the court, and be stronger. I feel at some moments in the game, I tend to be weaker than I am and let fatigue take over,” he said.

As “Ous” works to improve himself and those around him, the sky is the limit for him and the Bobcats program. And his head coach knows that.

“He’s really been a godsend,” Moore said. “I knew one of the freshmen would have to step up, and he’s made the most of his opportunity. He’s got a chance to be one of the best big guys who’s ever played here.”