How Bodyblade beat my butt 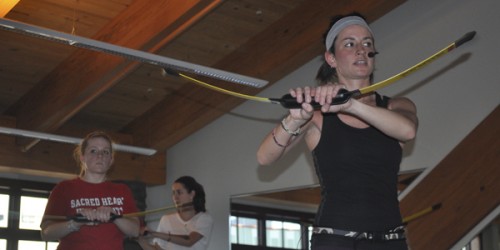 I was surrounded by mirrors, polished wood floors, the catchy beats of Nicki Minaj, and I realized all at once that I was trapped with no way out. Earlier in the week, when I volunteered to observe and participate in the fitness center’s Bodyblade class on Thursday at the Rocky Top Student Center, I simply thought it would be like any other day at the gym. As I looked around, I quickly realized that I had been mistaken. 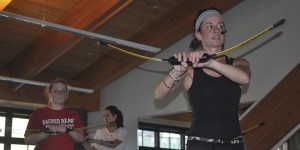 [/media-credit]According to instructor Amanda Frost, a senior physical therapy major, Bodyblade is “Pretty newly invented, and at first was only used in rehab, especially for shoulders. But then people started to actually come up with cardio and ab workouts for it.”

Bodyblade.com states that the blade –which has a flat and oblong shape, with a padded handle in the center– has an oscillating motion which must be countered by the contraction of the shoulder muscles, as well as hundreds of other muscles in the body, causing them to become strengthened and toned.

As the class began I felt pretty confident. Aside from the fact that I always managed to be on the wrong foot and going in the opposite direction of everyone else, I felt that I was definitely up for the challenge.

Frost led us through cycles: starting with cardio and gradually incorporating the blade to work our shoulders, arms, thighs and abs. I knew that I was getting a workout, but the way that this program worked my body only felt pleasantly strained. The radio may have been playing Avicci, but in my mind I was singing “Be a Man,” and reveling in the delusion that I, like Disney’s “Mulan,” was as swift as the coursing river.

I was beginning to think that I may not have gotten in way over my head, when suddenly we were instructed to follow the motions of Frost’s hands: and in what may be the most visually strange orchestration of all time, I proceeded to move in any direction she called out. I jumped, I slid, I squatted and I planked.

I was just about to burst out laughing at my genuine awkwardness when Frost yelled out to the room, “I know everything is shaking right now, that’s the point. Just don’t think about it and squat.”

After many cycles, which passed surprisingly faster than I expected, we wrapped up the class with some yoga-like stretches that relaxed and refreshed my body all at once.

In fact, the entire atmosphere seemed vibrant and satisfied with a good workout that didn’t crush either bodies or spirits.

“I think it’s a good workout, it’s different because it’s your whole body, so it’s a good warm-up when you go to the gym, and it goes by really fast,” junior Jessica O’Leary said.

“I love Bodyblade,” senior Lauren Ciesmelewski said. “It’s a different type of workout: it tones you but doesn’t bulk you up. It’s working all different muscle groups at the same time, and it’s always working your core.”