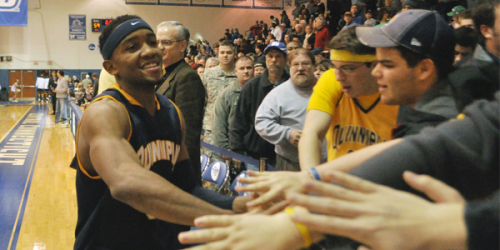 Quinnipiac (15-10, 8-6 Northeast Conference) won its sixth game in their last seven and are now in fifth place in the NEC standings, while Central Connecticut (10-14, 7-7) falls into a three-way tie for sixth. 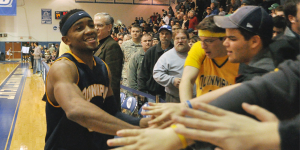 [/media-credit]“I told our guys during the media timeouts, they’re [Central Connecticut] playing stronger, tougher, and harder than us. I was imploring my guys to go to a higher level,” said Quinnipiac head coach Tom Moore, whose team held CCSU without a field goal for the game’s final six minutes. “Winning six of our last seven, it’s been the commitment to defense that has changed our season.”

James Johnson and Ike Azotam powered the Quinnipiac offense from the opening minutes, registering 20 and 15 points on the day, respectively. Azotam also notched 10 rebounds, which was good for his 12th double-double of the year.

Johnson hit several key 3-pointers, including a momentum changer with 4:20 remaining in regulation, which started a 13-0 Quinnipiac run.

“We knew they were playing at home, we knew they were going to come out hard. We approached it like a regular game, like we never played them,” Johnson said. “We wanted to stay focused, play our game, and then play defense and rebound.”

After leading by eight at the beginning of the second half, Central Connecticut slowly chipped away at Quinnipiac’s lead. Blue Devil Kyle Vinales helped provide the majority of the offense for Central Connecticut, shooting 50 percent from the field, while gathering a game-high 27 points. Vinales also shot 8-for-9 from the free throw line.

The Blue Devils held the lead for 7:46 of the second half. Ken Horton helped them hold the lead by hitting a key 3-pointer from well beyond the arc for a 57-51 lead with 10:24 remaining. Horton and teammate Robby Ptacek, who are second and third in the conference in scoring, combined for just 15 of Central Connecticut’s points Sunday.

Yet, Central Connecticut did not hold this lead for long, as Azotam followed a Johnson 3-pointer with a lay-up to tie the game at 59 with 3:49 remaining. The Bobcats then proceeded to score eight unanswered points on an Azotam layup, Johnson jumper, Ousmane Drame layup and two free throws from Dave Johnson.

The Blue Devils, who missed their last 11 shots, shot 29 percent from the field in the second half and were 2-of-14 shooting from long range.

“It’s a credit to our kids, and how much they believe defense can get us right now,” Moore said.

Central Connecticut held an eight point lead early in the first half, but the Bobcats answered with a 21-4 scoring run which put them up by nine points. Quinnipiac ended the first half with a 39-33 lead, despite hitting just 1-of-7 from the free throw line.

After today’s performance, James Johnson currently has 1,621 career points, and stands just 64 points away from breaking the program’s Division I all-time scoring record.

“Obviously, James Johnson has incredible will and we don’t get as much offensive confidence from anyone other than him,” Moore said. “He’s been doing it for four years for us, and he’s just an absolute warrior.”

Both teams received a nice help from the bench with 15 points each. Garvey Young contributed eight of the 15, including 2-for-2 on 3-pointers.