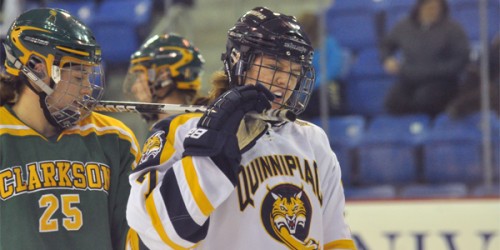 After a heartbreaking loss to St. Lawrence on Friday, Quinnipiac seemed to have a lack of motivation on Saturday, as the Bobcats lost their fifth straight game, this time to Clarkson, 3-2, at High Point Solutions Arena at TD Bank Sports Center. 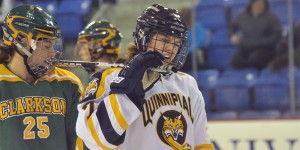 The first period against Clarkson featured sloppy play by the Bobcats consisting of weak shots and passes, several giveaways and two mental lapses.

The first lapse turned into a Clarkson (20-7-5, 14-4-2 ECAC) score. After freshman goalie Chelsea Laden stopped a shot, her defense was unable to clear the rebound. Instead, the rebound went right to Juana Baribeau, who put it past a screened Laden 9:45 into the first period.

The second big mistake had a similar result. The Bobcats zone collapsed on the point and left Hailey Wood open in front of the blue line. Wood took a high slapshot that was deflected by Brittany Styner and through the legs of Laden to take a 2-0 lead 15:40 into the first.

“We gave up a couple of opportunities in the first that you shouldn’t give up,” Quinnipiac head coach Rick Seeley said. “If you’re going to play a talented team in the playoffs, you can’t give off three goals off mental mistakes.”

Quinnipiac (15-14-2, 10-8-2 ECAC) started the second period in similar fashion to the first. The Bobcats turned the puck over in the offensive zone and forgot about the Golden Knight’s leading scorer Jamie Lee Rattray. Rattray picked up the puck at mid-ice where she was wide open. Rattray skated all the way down on the breakaway and put it past Laden for her seventeenth goal of the year and a 3-0 lead just 1:48 into the second period.

Erica Uden Johansson finally got the Bobcats on the board 7:03 into the second period on the power play. Uden Johansson took a pass at the right circle from Nicole Kosta and one-timed it past Clarkson goalie Erica Howe for the power-play score.

Thanks to Uden Johansson, Quinnipiac finally had some motivation.

With 2:56 to go in the third, they narrowed the Clarkson lead to one. A few seconds after a failed power play opportunity, Kelly Babstock kept the puck in the offensive zone behind the net. That’s when she found Kate Wheeler skating across the blue line and hit her with a pass that she fired low and through the legs of Howe.

Quinnipiac continued to battle and with 14.1 seconds left, Seeley called a timeout. Unfortunately, the play he drew up wasn’t able to tie the game and the Bobcats sealed their fate in the conference playoffs, as they will settle for the No. 6 seed.

“The play was designed to UJ (Uden Johansson). We were hoping Babs (Babstock) could slide it through,” Seeley said. “We actually wanted Babs to get it to the wall to Kosta and then for UJ to jump up on the side, but they did a good job defending it.”

Laden finished the game with 28 saves on 31 shots faced. Her counterpart, Howe, who shutout the Bobcats earlier this season finished with 30 saves on 32 shots.

Quinnipiac had excellent special teams in the game killing all four Clarkson power plays including a crucial 71 second long 5-on-3 in the third period. They also went 1-for-5 on their own opportunities with nine shots.

“We didn’t give up any power play goals, so the kill was great. We had some very good power plays. Our power plays have been looking better and better every week so we’re very encouraged about both,” Seeley said. “If you can kill a 5 against 3 on anyone, it’s pretty impressive and I think we did it with a lot of confidence.”