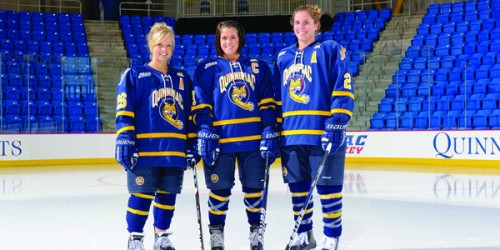 Leaders. This is one word to describe the women’s ice hockey captains. Over the course of their years at Quinnipiac, the senior captains have endured a long, promising career that has seen the hockey program achieve new heights with a few ups and downs.

The senior class has made numerous leaps and bounds over the last four seasons. The senior captain trio of Jordan Elkins, Kate Wheeler and Bethany Dymarczyk has been at the forefront of a program that in the 2008-09 season finished with just three wins and has rapidly progressed in such a quick time span since then.

“I know when we first got here our freshmen year, it wasn’t a winning team,” Elkins said. “We met as a team and we knew things were going to change since there was a new coaching staff.” 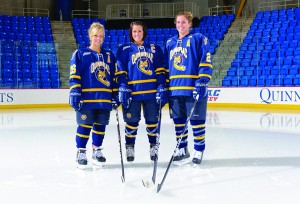 [/media-credit]
From left: Seniors Kate Wheeler, Jordan Elkins and Bethany Dymarczyk have been with the team since it won three games in the 2008-09 season and have led the program to where it is now.

After the three-win season, the coaching staff met with the freshman class and talked to the players about what they were getting into.

“I don’t think we knew how quickly they were going to change but after that team meeting the coaches met with us, the freshmen exclusively, and they told us just to bear with them,” Elkins said. “That it might not be the easiest time to start even for the first few years, but that it would definitely pay off.”

After struggling their first season, the captains saw a huge turnaround with the team. The hard work started paying off dividends the following season after the team had year one under the belt with a new coaching staff.

“Freshman year started out pretty rough,” Wheeler said. “We knew we had to do a lot to get to where we are today and we didn’t know if it would be [our] second, third, or fourth [season], or until after we left that it would come this far, the program, but we did what had to do so far.”

In the 2009-10 campaign, the Bobcats finished with a program record 19 wins, including 11 against Eastern Collegiate Athletic Conference opponents. During the season, the Bobcats received their first national ranking in program history as they were ranked 10th in the USCHO.com Division I Women’s Ice Hockey Poll. During this 19-win campaign, head coach Rick Seeley was named ECAC Hockey Coach of the Year in his second season with the team after leading the team in one of the largest turnarounds in the history of women’s college ice hockey.

Although Seeley was in charge of the 16-win turnaround, the roster that season only had six upperclassmen. Everyone else was a freshman or sophomore.

“They set a phenomenal example for the work necessary if you really want to develop a program well,” Seeley said. “Their work ethic on the ice, in the weight room, everything else has just been as much as you could hope for from any athlete for a coach. It’s not a question that they’ve set the standard; they’ve raised the bar.”

The hard work paid off each year for the captains as the team progressed not only on the ice but as role models to the younger players.

“As upperclassmen we have to show the others what to do,” Elkins said. “It’s all about hard work. When you come to our team; it’s on the seniors to show players how to work.”

Things might have seemed difficult back then for these three captains but they knew they had faith in the coaching staff to turn things around.

“I think just the success we had, not just in terms of winning and losing, but in terms of the culture we have now behind the scenes,” Elkins said. “I think it is a real testament to the character of the senior class and also the coaches.”

Seeley, the team’s fourth-year head coach, has guided the program from three wins in 2008, to a program-record 22 wins last season. Seeley said he believes it all starts with the seniors when it comes to developing a program from top to bottom.

“A major part of all of them, especially the captains, is how they have developed their game from the beginning,” Seeley said. “When we got here, they were the class we recruited, and generally, they were student-athletes that not many people thought could succeed at this level.”

Last season the Bobcats won more than 20 games for the first time in program history and reached the ECAC Hockey semifinals.

“Last year was a great year, and we probably could have done more, but each year we have been growing more and more,” Dymarczyk said.

Even though the team was ranked No. 9 in the country to start the season and now sits sixth in the conference, the captains are happy that they have solidified themselves as an ECAC contender in only a few years.

“Even though we haven’t won a big tournament, we have accomplished a lot of firsts for the program,” Elkins said.

For players that few wanted, their commitment and desire has made them all become solid hockey players and leaders at this level, Seeley said.

“From their freshman year, they’ve been the hardest workers, they’ve done the best in the classroom. Every way they have represent their program has been a great example,” Seeley said. “When you’re talking about developing a program and taking it from where we were, it’s essential to have student-athletes that are seniors.”

After going through many ups and downs, the program is on the verge of becoming perennial ECAC Hockey contenders, and the captains hope they will be remembered as the class that started the transformation into a championship-caliber team.

“We have gone through a lot,” Dymarczyk said. “None of the other girls know what that was about, but us being there and leading them and tell them what that season was like, we have grown a lot from those four years.”

For that to happen, it’s up to the younger players to continue the culture set by the captains, Seeley said. Elkins hopes her class’ lasting legacy will be left as an imprint on the program for years to come.

“I hope we’re seen as that class that got things going because I know that this program is going to go above and beyond anything that we have done,” Elkins said. “I hope we are remembered as the class that kind of kick started it and the catalyst of it all.”