Quinnipiac welcomed George Sprengelmeyer as director of music this past fall, replacing Sam Costanzo who retired from the position after holding it for 52 years.

Quinnipiac notified Sprengelmeyer that it was looking for someone with administrative experience who was a well-established musician. At the time, he had been giving guitar classes at Misericordia University for seven years and was the chair of the visual and performing arts department. He decided to apply for music director at Quinnipiac, not expecting to get the position, and was thrilled once he did.

As his first project, Sprengelmeyer plans to focus on improving the music groups.

“The ensembles here were pretty non-functional,” Sprengelmeyer admitted. “We had chorus that was a lot of pop music, and we had a jazz band that had one student in it.” 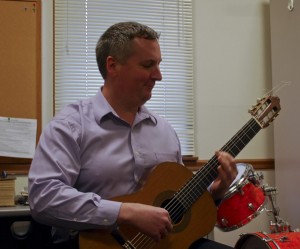 Sprengelmeyer sees the music department as a service to all the students.

“I really think that everyone should have an opportunity to play music on campus and experience the fun of playing an ensemble regardless of what their major is,” Sprengelmeyer said.

The opportunity to perform and play is going to increase dramatically in the short term, he said, as performances by two acapella groups and a glee club are expected this semester.

Sprengelmeyer also had 25 students that petitioned him to offer a symphony orchestra for the upcoming fall semester.

“The potential to grow here is amazing,” Sprengelmeyer said. “This could really be a great program and great service to this university and it’s all ready to happen.”

Sprengelmeyer said he plans to offer new classes in spring 2013, including a Latin American music class. He said students at Misericordia were not interested in learning diverse subject matters about music.

“My specialty is Latin American, South American/Brazilian music,” Sprengelmeyer said. “So I thought that perhaps what I do and what I enjoy doing would be better received on this campus.”

In the fall, the music department will begin giving private piano and voice lessons and shortly after, Sprengelmeyer hopes to open it up so students can study any musical instrument of their choice as a credit class.

Quinnipiac offers a music minor which requires students “to master the rudiments of musical theory and applied guitar, and to emerge with a comprehensive view of music history as well as the fundamentals of informed listening,” according to Quinnipiac’s website.

There are 10 music classes offered at Quinnipiac and two courses offered on an “as needed” basis. There are nine part-time music professors; Sprengelmeyer is the only full-time faculty member for the music department. Quinnipiac let professor and choral director Fred Rossomando go last semester.

“I was shocked to hear Rossomando was terminated after the fall semester when I couldn’t take QU Singers for the extra credit and had to wait until the spring to do so,” Griffin said. “Since Sprengelmeyer changed the requirements for QU Singers to be taken only for credit, the size of the chorus has also downgraded, and many people who want to sing can’t because they can’t fit it into their schedules.”

Griffin also had Costanzo as her Music Theory I professor. After he announced to her class that he would not be teaching Music Theory II in the spring, she created a Facebook page titled “Let Sam Costanzo teach in Spring 2012.” The page did not pick up steam, as it only accumulated nine likes. Costanzo will, however, continue teaching music theory classes in the fall, Sprengelmeyer said.

As the new director of the music department, Sprengelmeyer’s goal is to teach students a new way of seeing classical music and to let students realize it’s applicable.

Musician and sophomore Thomas Holmes plans to minor in music. Holmes plays the guitar and piano and has experience playing the saxophone. Holmes said he dreams of growing Quinnipiac’s music department.

“I wish there was a bigger program and a possibility to be a music major,” Holmes said. “It seems like Sprengelmeyer is trying to expand the music department which is what I want to see.”

But a music major is probably not going to be offered in the near future, Sprengelmeyer said. He would consider offering a music major, he said, only if he was sure there was an opportunity or a better-than-average chance students would be able to get a full-time career in music.

Junior Andrew Belliveau said he would be a music major if it was offered. Instead, he is a double major in film, video and interactive media and interactive digital design. He thinks future students will be impressed with Sprengelmeyer’s plans.

“Dr. Sprengelmeyer is what the music department needs to begin transforming into something bigger,” Belliveau said. “His understanding of the needs of modern day students and modern day music is spot on, and will make the program develop based on the changing of times.”