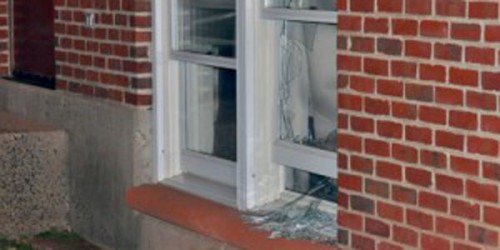 A student was arrested after breaking a window in Village during Sunday night's Super Bowl celebration.

One person was arrested after breaking a window in a sophomore residential building after the New York Giants beat the New England Patriots, 21-17, Sunday night in Super Bowl XLVI.

Many other Giants fans ran across Mount Carmel campus, yelling, screaming and celebrating after the team won.

Campus security and residential assistants were patrolling the area to make sure people were under control. Chief of Security David Barger said there were extra staff members in residential life areas and additional Hamden police officers patrolling off-campus areas. 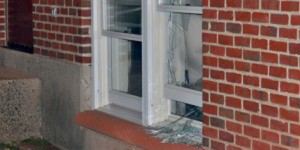 [/media-credit]A student was arrested after breaking a window in Village during Sunday night’s Super Bowl celebration.

“We weren’t as bad as UMass-Amherst, were we?” Barger said, referring to the 1,500 people rioting around campus and 14 arrests following the Super Bowl.

“There was a lot of riddling and a lot of boo-hooing,” Barger said. “There was no major incident aside from the window.”

Two students who live in the Village 450 building had their window broken and shattered.

“We heard a loud crash, we went running and the window was broken,” said one of the students, who wished to remain anonymous. “We went outside, saw a kid running away.”

A student was arrested after breaking a window in Village during Sunday night’s Super Bowl celebration.

way.”The person who broke the window was arrested and charged with criminal mischief and breach of peace, Barger said. Security told the student that the window was going to be boarded up for the night and repaired Monday morning.

“I was pretty pissed off that my window just got broken,” the other student said. “It is what it is, can’t do much about it.”