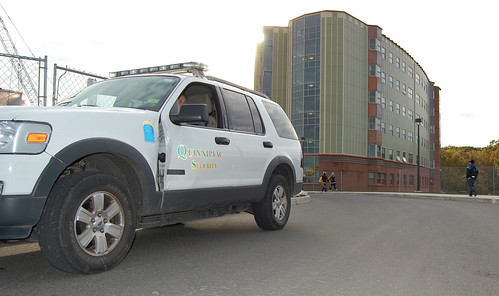 Quinnipiac Chief of Security and Safety John Twining has received quite a few calls from parents recently, asking why he’s covering up the assaults and car-jackings at the York Hill parking garage. Each time, he tells them the same thing.

“To my knowledge, there have been zero incidents in the garage.”

The talk about an incident may have began, he said, because of one case of mistaken identity in the garage at York Hill. Twining said a female student was pulling up to a spot, and then “a guy who was walking in the garage who knew her knocked on her window to get her attention, and she, having heard all kinds of rumors, was scared to death, and drove off and claimed that she was about to be car-jacked.”

But Twining did say more security was needed, both for Mount Carmel and York Hill.

On Monday, Junior Class Representative Ben Wald told The Chronicle that, “the University has committed budget resources to staff the York Hill parking garage 24 hours per day and seven days per week during the academic year immediately.”

According to Twining, one full-time and two part-time security officers will be hired. Previously, there was only one full-time officer assigned to York Hill, and the rest of the shifts were picked up by officers working overtime. Twining said that was a problem, because “you can only work so many hours, and then you start to break down.”

He also said that Mount Carmel could use more officers. “I have X [amount of] people at the gates, I have two people on the road on the day shift,” he said. “That’s suicide, it’s nothing, it’s nobody. We need more.”

Junior Bobby Michelin said that security on campus is lacking.

“I can definitely understand why some students would feel unsafe at times since there really isn’t much security actually patrolling,” he said. “If anything I feel that security is sometimes more concerned with catching their own students doing something wrong, than actually keeping the students safe from other threats.”

The one security officer at York Hill used to be responsible for the Crescent, the parking garage, the TD Bank Sports Center and the surrounding area. Now that new officers are being hired, there will be two officers on duty at all times, with one posted at the gatehouse to the garage.

While security insists that there is an officer on duty at all times, some students disagree.

“I see an inconsistency between what security is telling me and what the students are telling me,” Wald said.

Wald said students deserve to know they are safe on campus.

“You don’t pay this much money every year to have that feeling of uncertainty,” he said.

Wald was pleased that the administration had been receptive to student concerns by hiring additional security.

“The administration’s actions show us that they value our opinions, and needs,” he said. “Student Government acted on behalf of the students, and stayed strong to their mission statement, of representing the opinions, needs and wants of its constituents.”

To determine how the student body feels about the issue, the Student Awareness Committee will be sending out a survey to all on-campus undergraduates to determine how residents at Mount Carmel and York Hill feel about security.

Twining said that it was important for security officers to be very visible, if only to make students feel safer. “I’ve got to deal with the perception of people, because they’ve got to feel good,” he said. “And then I’ve got to actually keep them safe, which means I’ve got to do stuff other than just the gates.”

Twining would have liked to hire more officers for the openings of the York Hill and North Haven campuses, but “nobody was willing to commit to hiring X number of people, and I wasn’t able to hire anybody,” he said. “Now that there are students up there, there’s all of a sudden a perceived need for coverage.”

Wald stressed that he understood that these were tough economic times, and that SGA needs to cooperate with security to make sure that students are safe.

“It’s time to stop talking about what we’re planning to do, and start doing it,” he said.