A fashion model is generally known for having a pretty face, a fierce stride and an enviable sense of style. In light of all of that, it is difficult to look past the glamour of “America’s Next Top Model” contestant Isis King, to see all of the obstacles that she has overcome. 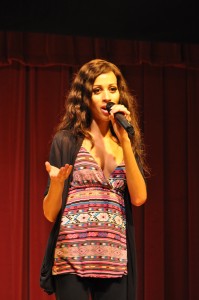 [/media-credit]Born as the child of a single 17 year old mother, King faced poverty, homelessness and witnessed numerous abusive relationships; but her greatest hurdle by far was the fact that she was a young female born inside a male body.

At an event sponsored by the Student Programming Board in Buckman Theater on Friday, King, the first ever transgendered “ANTM” cycle 11 contestant, spoke about the struggles, transitions and triumphs that have shaped the person she is today. The talk, attended by more than 30 students, was filled with laughter, acceptance and entertainment generated by the comedic guest of honor.

The slender 5’7’’ model sported skin-tight pants and a wildly patterned shirt as she paced the stage with a confident strut and contagious energy.

King quickly confronted the taboo of being a gay transgender in the African American community.

“I always felt like I was in the wrong body,” King said. “I knew I was different, but I also knew that wasn’t accepted.” 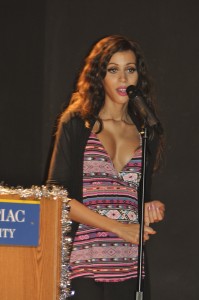 [/media-credit]King, who considers herself a Christian with a personal relationship with Jesus, is a strong advocate for acceptance. King said she believes that minority communities can gain acceptance through more positive media representations and exposure.

While she continues to support the Lesbian, Gay, Bisexual, Transgender community, it is not her only interest. In fact, she will soon depict the hardships of prostitution in the Philippines in the upcoming Indie film, “Hello Forever.”

The first part of the evening consisted of King’s reflection on her past experiences, including her economic, personal and relationship struggles. King also referenced the confidence she gained during her two cycles on reality TV and in the MSNBC special, “Born in the Wrong Body.”

Jocelyn Dulanie, SPB’s junior Talks and Topics Chair, knew that she wanted King to come to campus when she heard her speak at a National Association for Campus Activities event.

According to Dulanie, the biggest draw of the evening was the Q&A portion.

“[Isis] is so open, and it’s a great opportunity for the students to interact and get their questions answered,” Dulanie said.

Sophomore Jamie Schnicker was equally impressed with the event.

“[Isis] is very inspiring to not just the LGBT [Lesbian, Gay, Bisexual, and Transgender] community, but also to anyone who has been in an abusive relationship, or who has experienced poverty or homelessness. She makes me want to be a better person,” Schnicker said.

“It was cool that she was so real, and not at all fake like you may expect,” Scanlon said.