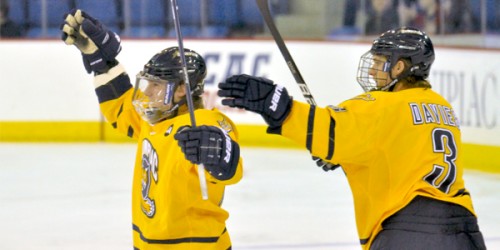 “Clarke has looked good in practice lately,” Quinnipiac head coach Rand Pecknold said. “He was great tonight. He made some huge saves.” 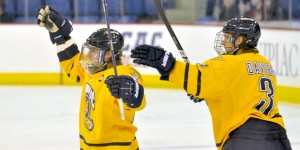 The Bobcats (14-9-5, 6-6-4 ECAC Hockey) scored their only two goals in the first eight minutes of the game. Three minutes in, sophomore Connor Jones scored the first goal of the game, assisted by junior Zach Davies. The next goal was scored on a power play by junior Ben Arnt, assisted by senior Yuri Bouharevich and Davies.

“I wasn’t really sure if that was a game winning goal or not, but it was being in the right place at the right time,” said Arnt.

Quinnipiac scored all five goals this weekend in the first period. The Bobcats are in sixth place in the conference, three points behind Colgate and Harvard, which are tied in third place.

The Big Green (9-10-4, 6-7-3) answered the Bobcats with a goal of their own in the third period. With 6:18 remaining, sophomore Eric Robinson scored his team high 10th goal of the season off a tip.

Dartmouth almost scored their first goal of the game on a penalty shot. With 8:10 left in the second period, Clarke made a huge save to his left against Big Green junior Mark Goggin.

“I was just trying to make him use the first move and it worked,” Clarke said. “I was thinking if he was gonna come fast, he was gonna shoot it and if he came slow, he was gonna make it soft.”

Quinnipiac’s next game will be the first of four straight road games as it travels to Canton, N.Y. to take on St. Lawrence on Friday at 7 p.m.