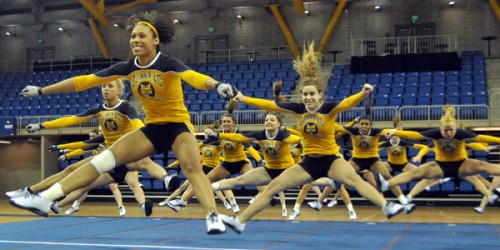 Despite strong performances by Christina Lasto and Trishia Pierce, sloppy play caused the Bobcats to drop the match, 284.540 – 274.855 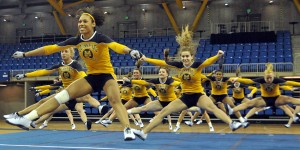 The day began with the Compulsories, in which the Bobcats split, after taking the Pyramid and Tumbling events, lead by Trishia Pierce.

Maryland began to take control of the game during the Acro, especially on a key mistake during the Flip event, where Quinnipiac received a match-low, 7.4.

“Our acro round is something I’ll put on the coaches, there are some better start values that they can execute,” Quinnipiac head coach Mary Ann Powers said. “There were a lot of case of nerves with some of my freshman, but otherwise I think Maryland was just the better team.”

The Terps’ high scores continued throughout the pyramid, when they took two of the three events to go into halftime with a 94.19 – 90.8 lead.

The Bobcats continued to play sloppily after the break, losing the toss after dropping two out of the three events. Quinnipiac’s poor luck continued, as the Bobcats lost five out of the six events in the tumbling round. Going into the Team event, Quinnipiac was only down 179.490 – 175.025.

Quinnipiac was unable to salvage the match with the team event, and they fell to Maryland 109.63 – 105.6, which sealed the deal on the Terp victory.

“They can hit their team routine, but it’s all of their acro and all of their pyramids, and quite possibly coach needs to go back and hit the books,” Powers said.

The Bobcats take almost two weeks off before traveling to Azusa Pacific at the University of Oregon, Feb. 17 at 7 p.m.