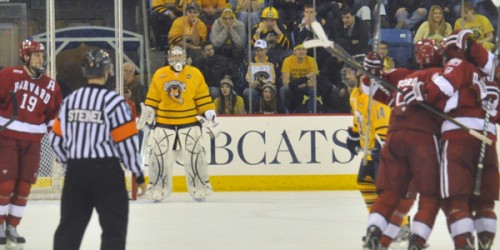 Despite holding a 3-1 lead in the first period, Quinnipiac fell to Harvard 6-3 on Friday at the TD Bank Sports Arena.

It has been 20 days since the Bobcats last played, but their play in the first period showed otherwise.

The Bobcats jumped out to a quick lead with two goals within the first three and a half minutes of the game.

“I thought that our first period was excellent,” Quinnipiac head coach Rand Pecknold said. “We had great energy, we competed, and I think ultimately were very confident.”

Bryce Van Brabant put the Bobcats on the board first with a goal 2:01 in from a Jeremy Langlois pass. Kellen Jones increased the Bobcats lead to 2-0 later in the period. Matthew Peca started off the play slapping the puck over to Zach Tolkinen who found Jones for the goal.

Harvard scored once in the first period on a goal by forward Marshall Everson. Patrick McNally and Alex Killorn assisted on the goal which was Everson’s ninth of the year.

The Bobcats’ last score of the period came with 29 seconds left on a power play goal from Loren Barron. Peca recorded another assist on the play.

Harvard scored two goals in the second period and held Quinnipiac scoreless to keep the game tied up at three going into the third period.

“I think the first goal was just a small mental breakdown with sloppy defense,” Pecknold said. “The second one again, we got five guys within six feet of the net and nobody covers that kid. I think ultimately the third goal took the wind out of our sails.”

Harvard’s second and third goals came within 19 seconds of each other. The third goal soared through the air straight at goalie Eric Hartzell’s glove. But the puck tipped the top of his glove and fell into the net behind him.

With the game tied going into the third period, Hartzell remained in net. But with 14:49 remaining in the game, Crimson forward Luke Greiner put Harvard ahead 4-3 and knocked Hartzell out of the game. Dan Clarke replaced Hartzell and made seven saves on eight shots faced.

Hartzell finished with 20 saves before he was pulled.

The final goal of the game came with 12 seconds remaining on the empty-netter to extend the lead to 6-3.

“There was just a lot of sloppiness on the defensive side,” Pecknold said.

The Bobcats will be back in action Saturday when they take on Dartmouth at 7 p.m. at the High Point Solutions Center at TD Bank Sports Arena.