Recipient of Campus Activities Magazine 2011 College Speaker and Diversity Artist of the Year, Elliot has toured the country for three and a half years with his presentation, “What Makes You Tic?” about his life long struggle with Hirschsprung’s disease and Tourette’s syndrome. 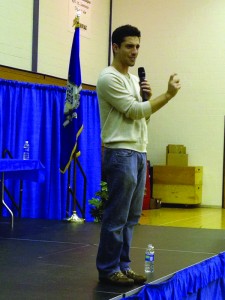 [/media-credit]Marc Elliot speaks to students at Burt Kahn Court last Thursday night about his experiences as a sufferer of Tourette’s syndrome. About 70 students attended and gave Elliot a standing ovation.

Elliot performed a simulation of having Tourette’s syndrome with the audience by randomly placing cards with a certain sound, word or phrase on audience members seats. Throughout his presentation “I love you” and a dogs barking were heard throughout the court.

A consistency throughout his presentation was the idea of tolerance and the phrase, “live and let live.”

Growing up in the suburbs of St. Louis, Elliot, 26, was diagnosed with the rare intestinal birth defect, Hirschsprug’s disease, two days after he was born leaving him with only four feet of working intestines. However, this was just the beginning of his challenges. At the age of nine, Elliot was diagnosed with Tourette’s syndrome which causes him to have involuntary physical and verbal tics.

Elliot said his Tourette’s manifested in obsessive compulsive disorder when he would contemplate what the riskiest thing is he could say in the setting he was in. Ticking it was the risk. Specifically, Elliot would chomp his teeth into his jaw and tic inappropriate words from racial and ethnic slurs to body parts.

“A tic is like an itch you can’t scratch multiplied by 10,” said Elliot, whose tics have subsided through therapies. “Once you tic, the itch goes away.”

Throughout Elliot’s life, he met people who would not tolerate his Tourette’s syndrome and would tease him for his frequent uncontrollable bowel movements due to his intestinal disease. He would involuntarily shout racial slurs in a room full of African Americans, and understood it was offensive, but even when he explained his disorder, people still would not tolerate it.

The event, co-sponsored by the Student Programing Board and QU After Dark, was part of SPB’s Rock ‘n Road week which was the grand prize of a contest in Campus Activities Magazine. The series consisted of three days and five college artists performing on campus for free.

Elliot was a clear choice as one of the performers after his presentation on campus two years prior, Vice President of SPB Victoria Adler said.

“When I first saw him, I fell in love with Marc’s message,” Adler said. “We tend to over look this type of disorder when speaking about tolerance. It usually is focused on race and ethnicity.