Inside the Super Bowl: Deans, sports experts submit their picks 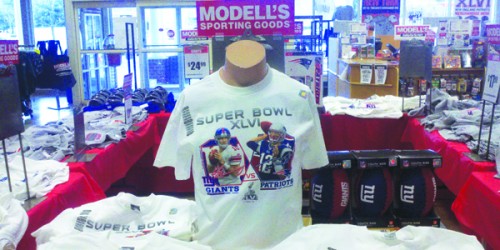 It’s often the most-watched TV program every year. Whether you watch for the game, the halftime show or the commercials, people watch the Super Bowl. At Quinnipiac, even more TVs will be tuned in than usual because of the teams who made it – the New York Giants and the New England Patriots.

No other matchup could have divided the university as evenly as this one has. 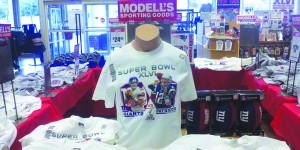 [/media-credit]Slightly more than half of the Quinnipiac community wants the Giants to win, according to a poll that received 218 votes via the Chronicle’s Facebook page. Giants: 121 (56 percent), Patriots: 97.

After asking many prominent figures and sports fans on campus, the consensus is that the game will be close, within a touchdown, and that the Giants, winners of their last five games, will raise the Lombardi Trophy.

More importantly to some students, the halftime show will feature Madonna and LMFAO, and Go Daddy has another Danica Patrick commercial prepared. Honda’s “Matthew’s Day Off” commercial, a play on “Ferris Bueller’s Day Off,” has also sparked interest among students.

Manuel Carreiro, vice president and dean of students, said he was a little surprised by the matchup. The Giants “stunned” him and he thought the Patriots were playing “terribly.” But he is excited for Sunday’s game, as are the students.

“People are excited because it’s two teams from here,” said Carreiro, who grew up in New Bedford, Mass., which is within an hour from the Patriots’ Gillette Stadium, and predicted the Patriots will win, 24-21.

Bronx, N.Y., native Quinnipiac President John Lahey said he will root for the Giants. But in his prediction, he accounted for his Irish heritage.

“Although the Patriots have an outstanding Irishman at quarterback in Tom Brady, I think the New York Giants’ Irish Coach Tom Coughlin will devise a superior game plan that will result in the Giants once again beating the Patriots in the Super Bowl. I predict the final score will be 24-17, Giants,” Lahey said.

After the Giants beat the Patriots in 2007, 17-14, in a dramatic ending to Super Bowl XLII, some students celebrated too hard on Mount Carmel campus. Carreiro said security will be ready Sunday night, but hopes it won’t happen again.

“I always worry about situations like this,” Carreiro said. “I think that we are prepared to make sure that people have fun and do it responsibly. It would be foolish to do otherwise.” 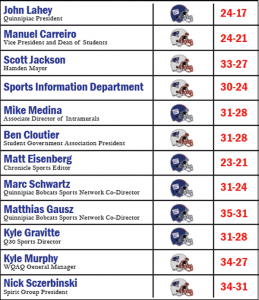 Students might think the Super Bowl will help the town of Hamden economically, as it is centered between Boston and New York, home to the two teams that will play in Indianapolis’ Lucas Oil Stadium on Sunday. However, Donn Johnson, a professor of economics who teaches a sports economics course in the fall, says the Super Bowl will not impact the town as much as students expect.

“Honestly, I think the economic activity is overstated by the people who benefit from this,” Johnson said. “What you hear from the NFL is quite different, I think, from what you hear from an economist if we estimated the value.”

When the game is over, Hamden’s popular sporting goods store Modell’s will open its doors to sell championship goods, according to Dave Czajkowski, the store manager.

The store skews more toward Giants apparel, but offers some items for Patriots fans.

The Super Bowl will be the most-watched ever, according to Boston Globe Media Columnist Chad Finn.

It will not be the highest-rated television event because there are more options to watch on TV these days than there were 20 years ago, Finn said. He estimates that 125 million people will turn on the Super Bowl.