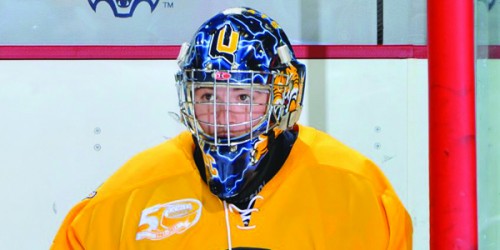 In the first period of Quinnipiac’s season-opening exhibition against Acadia on Oct. 2, Rand Pecknold found Jake Whiting sitting at the end of the bench and told the goalie to go warm up in the tunnel.

“I was just ‘uh, uh okay.’ I wasn’t really thinking at all,” Whiting said. “Slide down the bench and everyone’s starting to tap me on the pads and I just kind of got psyched up for it.” 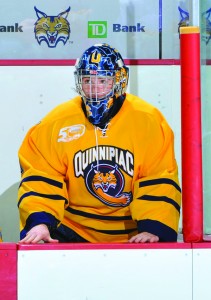 And with 4:50 left in the first, Whiting relieved starter Dan Clarke for his first appearance in a game since high school.

But that’s when things got interesting. With the faceoff at the opposite end of the ice, Whiting was still absorbing the atmosphere in the arena. But then Acadia broke up ice on a breakaway.

“I thought ‘Oh god. We threw Jake into the fire,’” Pecknold said.

But the Acadia skater was tripped by a Bobcat on his way toward Whiting and never got a shot off.

“I was praying it wasn’t going to be a penalty shot,” Whiting said.

Whiting would go on to stop all five shots he faced in the period. Clarke would go back in net to start the second, but for Whiting, that 4:50 on the ice was more than enough.

“My parents were there, a few of my roommates were there. Boys were going nuts on the bench, Whiting said. “It was an unbelievable feeling to feel that atmosphere and feel that support.”

Whiting spent his freshman and sophomore years as the team manager before joining the team as the fourth goalie his junior year.

This season, Whiting, now a senior, is back with the team. He wears No. 29 and is the third goalie behind Eric Hartzell and Clarke. But for a kid who thought his playing career was done, it’s a dream come true.

“For two years hockey was purely the business side of it for me. And I was okay with that,” Whiting said. “But when I had that first conversation with Rand junior year, I was just blown away. I can’t be more grateful for the opportunity.”

Whiting played high school hockey for four years at The Rivers School in Weston, Mass. and had been recruited by Sacred Heart and St. Michael’s College, but chose Quinnipiac.

When he arrived in Hamden, Whiting wanted to stay connected to the game he played throughout high school. So he contacted Pecknold about the possibility of being the team manager.

“As soon as I decided on Quinnipiac, I emailed Coach Pecknold and Ben Syer, former assistant coach, and asked if there was any way I could be a part of this organization doing the manager’s job,” Whiting said. “I got a response back saying ‘Yep. Come in the first day of school and we’ll get you situated for a manager position.’”

While a manager, Whiting did a little bit of everything and got more and more involved every year.

“Every now and then there would be an alumni game or open ice for some of the pro guys who would come back, and I’d go out on the ice with them,” Whiting said. “And I started traveling with the team doing road responsibilities and just slowly evolved into what it is now.”

But one of his biggest duties was running the video operations for the team during the game. In between each period, Whiting would bring the video to Pecknold and the assistant coaches for in-game analysis. It allows the coaches to “see what they’re doing, see what we’re doing wrong and kind of work from there so we can make adjustments in the game,” Whiting said.

Last season, Pecknold invited Whiting to join the team as the fourth goalie behind Hartzell, Clarke and Pat McGann. Even after being told he wasn’t going to play much, Whiting was still all in.

“My jaw just dropped. I was so excited to hear that,” Whiting said. “I figured I was done playing hockey for the rest of my life.”

While the plan was for Whiting to be on the team for only one season and then go back to being the manager, he impressed the coach enough that Pecknold brought him back for his senior year.

For Pecknold, Whiting’s knowledge of the game helped convince him that the senior deserved the spot. And while Whiting may have been a little rusty after not playing for three years, Pecknold has watched the goaltender improve over the last two years.

“The big thing that he kind of didn’t figure out until this year, I kept telling him to get out of the net and challenge more. Now he’s a lot more aggressive with that. He’s not a huge goaltender so when you’re smaller you need to challenge.”

That was evident during a recent practice. The team had a competition that consisted of groups of players playing 5-on-3 hockey. Each team was led by its goalie: Clarke, Hartzell and Whiting. The winner was the group that gave up the least amount of goals.

“I always try and push the other two a little bit harder, so whenever I can get a few wins under my belt it gives me something to chirp at them for,” Whiting said. “It gives me a sense of pride, being the third goalie and beating out them for a win.”

With just eight games left in the regular season, the odds are not in Whiting’s favor of making another appearance during a game. But Pecknold won’t rule anything out if the timing is right.