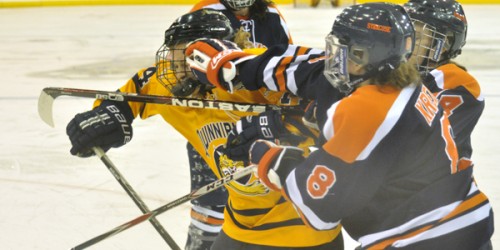 A season-high 55 shots on goal wasn’t enough for the Quinnipiac women’s ice hockey team as the Bobcats lost to Syracuse 3-2 on Saturday, splitting the weekend series.

After going down 2-1 in the first period, Quinnipiac head coach Rick Seeley pulled junior starting goalie Victoria Vigilanti with 2:43 remaining in the period. 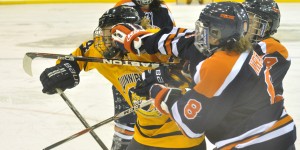 Vigilanti gave up two goals on five shots faced. She was replaced by freshman Chelsea Laden who shutout the Orange on Friday night in a 3-0 victory.

Laden stopped 17 of 18 shots, but the one that got by her would prove to be the game-winner. With the loss, she snaps her four game personal win streak and falls to 4-1-1 on the season after winning her last two appearances.

Vigilanti has given up 12 goals in her last four starts, including two today, which cut her start to just over 17 minutes.

“We gave up a couple weak goals. I thought all three goals were pretty weak so we have to figure out the goaltending situation,” Seeley said. “We have a real important conference stretch coming up. But I would say at this point, Laden has won the starting job.”

Quinnipiac (15-9-2, 10-4-2 ECAC) finishes up the season with six conference games, the next two coming on the road. The loss drops them to a three-way tie for third with Dartmouth and Clarkson, who all have 22 points. Cornell leads the conference with 28 points and Harvard is second with 23.

Syracuse (9-16-3, 0-3-3 CHA) got onto a 2-on-1 break 11:22 into the third period. Margot Scharfe found Holly Mattimoe in the offensive zone who carried it down and sent it to her right to Nicole Ferrara. Ferrara one-timed it past a diving Laden for the game-winner.

The first goal of the game, which was scored by Scharfe, also came on a 2-on-1 advantage.

The Bobcats finished the game with 32 shots more than the Orange, who finished with 23.

“Scoring doesn’t matter if we don’t pay attention to defense,” Seeley said. “Giving up two odd man rush goals today with no back check or changes, no matter what we’re going to do offensively(defense matters).”

Opposing Vigilanti and Laden was Syracuse’s Kallie Billadeau. Billadeau stopped a career-high 53 shots and improved to 5-8-2 on the year.

“I thought their goaltender made a lot of good saves, we have to do a better job of screening,” Seeley said. “She saw way too many of those 55 shots. So it’s just another point that we are shooting 55-23 and it was 3-2. If you’re not taking care of the little things it’s not going to matter.”

Brittany Lyons netted a goal for the Bobcats as well as Breann Frykas, who scored on a power play.

Quinnipiac will return to conference play on Friday when it travels to Boston to take on second-place Harvard at 7 p.m.