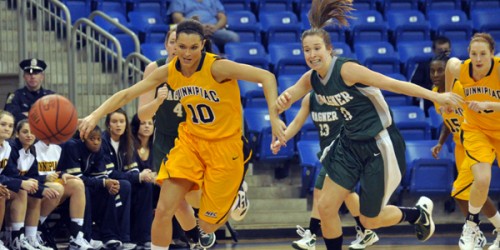 Stellar offense and tough defense was the story at TD Bank SportsCenter Saturday afternoon, as Quinnipiac defeated Northeast Conference opponent Wagner, 77-60. Quinnipiac (15-5, 7-2 NEC) won its fifth straight contest, and have outscored its opponents in the last three games by 91 points. 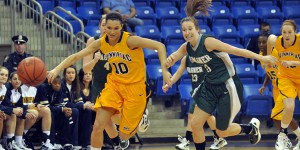 “Defense for our team is key for us winning these games, it’s harder for them to run their plays, and it really helps our team win a lot of these games,” Barron said.

McQuain had a double-double, as she brought down 13 rebounds. Barron scored 17 points and Goodchild added 15 on 6-of-9 shooting. Quinnipiac moved into sole possession of second place in the conference after Monmouth lost to Bryant. The Bobcats trail Sacred Heart by one game.

Quinnipiac put pressure on the Seahawks (2-18, 1-8 NEC) from the start, and forced Wagner to turn the ball over 10 of their 15 teams within just the first eight minutes of play.

“Our defense continues to be our identity and helps set the tone for what we do on the offensive end,” Quinnipiac head coach Tricia Fabbri said. “We’re really opportunistic on defense, getting those steals and buckets, it really breaks the other team’s back.”

Quinnipiac only continued to pour it on after the break, as Goodchild hit two key 3-pointers to give the Bobcats a 48-28 lead with 17:37 to play. The Bobcats continued to pull away from the Seahawks, adding on an additional 21 points and had a 28-point lead with 8:51 remaining.

“Brittany’s becoming a more efficient and effective low block scorer,” Fabbri said. “When you see a kid that’s her size and come out and be springy, its really an emotional lift for our team.”

The Bobcats bench also played a decent role on the day, combining for 15 points between them.

The Bobcats return to the TD Bank Sports Center Monday night to square off in another conference matchup against Mount St. Mary’s at 7 p.m.