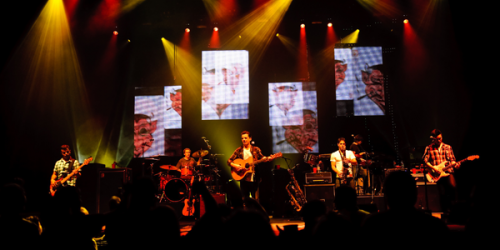 Quinnipiac students gathered in Burt Kahn Court last Thursday night awaiting the announcement of the talent for the annual Wake the Giant spring concert. The atmosphere was electric as students watched the video announcing that O.A.R. will come to the TD Bank Sports Center on Sunday, April 22.

The Student Programing Board sent out a survey last November inquiring with the students who they desired to see perform. More than 1,800 students took the SPB spring survey, with top choices including O.A.R, LMFAO, Kid Cudi and The Script, SPB Mainstage Chair Jamie Kloss said.

After the results were in, the committee determined that Quinnipiac needed a good rock concert after multiple hip-hop and pop performers in the past years, Kloss said. 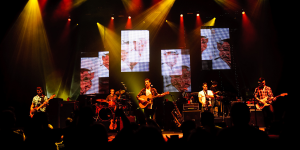 [/media-credit]“Many factors go into booking each concert such as when our venue is available, when artists are touring, if they’re routing through our area, and obviously, budget considerations,” Kloss said. “O.A.R. has been a popular choice on our survey for years, and with the success of their August album, it was the perfect time to pursue this concert.”

Steve Pagios, assistant director of student center and campus life, said that O.A.R. has been a front-running choice among the student body for many years.

“There has been a strong presence for this type of show and crowd engagement,” Pagios said. “O.A.R. is one of the better rock shows and they love being on a college campus to perform.

SPB has received mostly positive feedback about their choice from the student body, Kloss said. Sophomore Conner Croteau has been to many O.A.R., or Of A Revolution, concerts and is looking forward to another show.

“They are a very good live act and I cannot wait to see them,” Croteau said.

Kloss, a senior, has heard complimentary comments from fellow students following the announcement.

“O.A.R. puts on a fantastic, one-of-a-kind live show, and students who have seen them before are definitely spreading the word,” Kloss said. “In particular, I’ve heard great feedback from seniors, who are excited to end on a fun, high-energy rock show.”

But, not all seniors agree.

“After having Kesha last year my expectations were high,” Senior Samantha Baccala said. “The only songs I know are from their older CDs and I know they have a new one out so that’s all they will probably play. I wish it was someone more relevant.

In the weeks before the announcement, SPB released a teaser video to the student body to generate discussion and interest in the spring concert announcement, Kloss said.

The teaser gave clues to students as the video showed the organization’s mascot, “Sp Bee,” going through television channels that displayed popular ‘90s shows. The numbers in the upper-right corner represented a code of numbers: 15, 01 and 18, in order, which corresponds in the alphabet to letters O, A, R.

“After seeing the promo of all 90’s stuff, it just wasn’t who I expected,” Baccala said. “When I read an article announcing it was O.A.R. I was let down. I know we could have had someone much better because my friends who go to Wagner College got the Gym Class Heroes for their concert.”

The alternative rock band formed in 1997 at Ohio State University, and has since toured the world with such hits as “Shattered” and “Love and Memories.” The band will bring its own opening act to the TD Bank Sports Center.