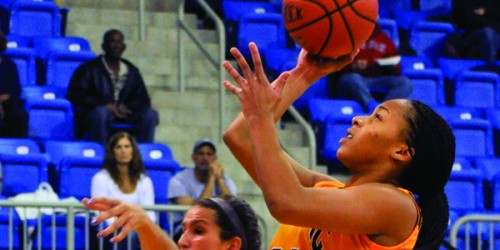 The Quinnipiac women’s basketball team proved that despite the amount of young players on the court, youth is not a factor in winning games. The freshman players are contributing just as much as the veterans and Jasmine Martin has led this youth movement as a spark off the bench, averaging 11.2 points per game. 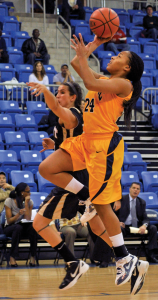 [/media-credit]“Her presence has been an immediate lift to the entire team and what we are able to accomplish this year. She is just such a dynamic player coming into the program,” head coach Tricia Fabbri said. “It really has been so beneficial to just have her ability, athleticism, strength and skill to do great things for us this year.”

Martin’s hard work ethic has paid off as she averages 20.1 minutes per game, the second-most on the team for freshmen. Martin was also named Northeast Conference Rookie of the Week for Nov. 28 and received the NEC Player of the Week honors on Jan. 18 alongside teammate Felicia Barron.

Martin’s shot never seemed to be an issue though, as she scored 20 points against James Madison during her collegiate debut. She set her career high on Jan. 16 in a win over Robert Morris with 22 points.

Martin also ranks fifth in the NEC in best free-throw percentage, as she is shooting 78.7 percent from the line.

Martin explained the transition to college is never easy as an athlete.

High school sports are always more simplistic and she dominated in the environment, only having to play the role of an offensive threat. Martin learned that she needed to become a defensive threat for Quinnipiac as well.

“Coming into college I wasn’t much of a defender. I had to teach myself to stay determined on defense,” Martin said. “It’s really easy to get out of focus.”

Fabbri echoed the difficulties for a normal freshman making the transition from high school to college and said that Martin is adapting well.

“I think for any freshman, the adjustment of the first semester with going through classes, the demands on your time, and how physical the game is at this level,” Fabbri said. “She has it all under her belt. We have all the confidence in the world when she’s in the game to do what she’s got to do both offensive and defensively.”

As for being a young team, Fabbri said this is a non-existent issue. With a record of 18-5, 5-2 in the NEC, she said the team is really working hard and most importantly working hard together.

“All the players have really blended and meshed together. The chemistry has been phenomenal,” Fabbri said. “Even though we are young, our lone championship appearance was with all freshman. And at this point in the season, no one’s a freshman. We are all experienced, but in terms of years we might be young.”

Fabbri said one of the best things about Martin is the fact that she is only a freshman because she still has a lot of time to develop as a player and as a team leader.

“I just think the best thing about [Jasmine] is she has such a positive outlook and a big positive attitude,” Fabbri said. “She is just so fun loving off the court and wants to have a good time and when she walks in the room people want to follow her. She’s going to develop into a tremendous leader in this program, on this team, and over the course of her career.”

Martin and the team’s play will need to be at its best as the team prepares for more NEC matchups, as the Bobcats are tied for second place with Monmouth University and are one game behind Sacred Heart.