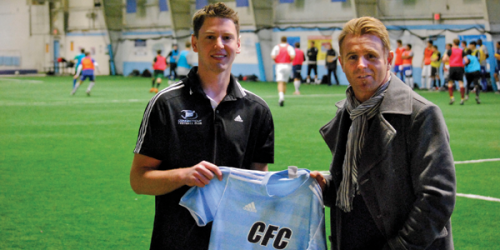 Robin Schuppert (left) and Steve Coxon are two of the three people with ties to Quinnipiac University who have led the startup of Connecticut’s new soccer franchise.

After 10 years without a professional soccer team in Connecticut, Quinnipiac women’s soccer assistant coach Steve Coxon decided it had been long enough. Coxon, with the help of women’s head coach Dave Clarke, has created Connecticut’s newest and only soccer franchise, CFC Azul, based out of Hamden.

CFC Azul will play in the Premier Development League (PDL) of the United Soccer Leagues. The PDL is the top developmental men’s league in North America. Each team plays 16 matches and the majority of the rosters are filled with collegiate players. The league enables these players to participate in higher competition while retaining their collegiate eligibility. 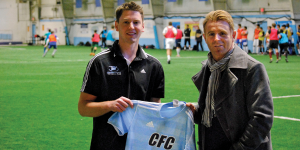 [/media-credit]Robin Schuppert (left) and Steve Coxon are two of the three people with ties to Quinnipiac University who have led the startup of Connecticut’s new soccer franchise.

Coxon serves as the team’s president and is also a majority owner while Clarke serves on the board of advisors. Quinnipiac alumnus Robin Schuppert also joined the Quinnipiac coaches and is the general manager of the team. Schuppert graduated last year with a degree in broadcast journalism and is also the former sports editor of the Quinnipiac Chronicle.

Clarke brings immense knowledge of the game having coached the Bobcats for 13 years. He has also assisted with the Irish national women’s soccer team in the “Achieve Your Gold” tournament and is a licensed instructor for the United States Soccer Federation.

Over the past three years, 111 players have been drafted in the MLS SuperDraft out of the PDL, which is more than 70 percent of the selections.

Coxon is familiar with the PDL having played for the last soccer franchise in Connecticut, the Connecticut Wolves, from 1993 to 1999. But the franchise based out of New Britain folded in 2002 and no professional soccer team has existed in Connecticut since.

“We felt the time was right to start a new team and new program,” Coxon said. “We are ready to do that now with our infrastructure and setup.”

Coxon has found out that starting a new franchise from the ground up is no easy task.

“It’s a lot more work than I ever expected,” Coxon said. “Initially I thought I could do a lot of the work and get some help but it has come to the point where we have a full-time office, full-time general manager and we’re hiring four or five interns. It’s a big task and we haven’t even kicked a ball yet, so there’s a lot more work ahead.”

Other than the initial struggles, the team is still looking for a field to play its home games.

“We’re probably going to be playing at various college campuses,” Coxon said. “It’s hard to say because we don’t have anything confirmed yet but we’re talking about going down to Yale, playing some games in the Hartford area and playing in Fairfield County so we still haven’t got it all locked in yet.”

CFC Azul has been holding tryouts at its indoor facility owned by Coxon.

The team has held two tryouts, which have been attended by 187 players. It intends to lower this number to 25 to 30 and then begin to train and get ready for its first game on May 5.

Coxon’s role with Quinnipiac as an assistant coach is considered a part-time role, which allows him to focus some time on CFC Azul.

“The heavy-duty work for me is in the fall, starting mid-August, and this team is a May, June, July team,” Coxon said. “So there should be no conflicts.”

Clarke also said that there would be no issues with the two teams’ schedules.

“By the time the league is in full swing it’s the summer so there are no areas of conflict,” Clarke said.

Clarke will enter his 14th season of coaching at Quinnipiac in the fall and has had no trouble adjusting to a more laid back role on the team.

“It’s good to be involved in another aspect of the game, but I don’t have to be a head coach from an egotistical standpoint,” Clarke said. “I just want to be around good coaches and good players. You learn to view the game from a different perspective.”

Schuppert, who worked with the women’s soccer team his senior year, said he is honored to be working with Coxon and Clarke on the team.

“It’s not work to me; it’s living a dream,” Schuppert said.

Schuppert, who was born in Germany, moved to California when he was 13 and then moved to Hamden to attend Quinnipiac when he was 17.

“I’ve always been into soccer,” Schuppert said. “It’s a bit different for Europeans. Growing up, soccer is in your blood. I don’t know how to put it into words. It’s surreal.”

Coxon and Clarke knew Schuppert possessed the necessary skills for the modern-day media after he worked closely with them during his senior year and was originally asked to help out with the team as the media guy, but his role has evolved into that of the general manager.

“There’s a great deal of importance with electronic media, social media, marketing, video technology and the ability to stream in video and interviews,” Clarke said. “Robin has all that experience. Someone in his role maybe 20 years ago did it all in news print and now he doesn’t have to rely on the old media. He can be very proactive with Facebook, video and streaming, and I think Robin will be at the forefront of that.”

Apart from starting up the soccer franchise that is only a few miles away from Quinnipiac, Coxon was recently accepted into the Connecticut Soccer Hall of Fame. He will be officially inducted on Jan. 28. in Farmington.

“It’s nice to get in there,” Coxon said. “There are a lot of my peers in there, guys I played soccer with in the pro leagues, guys I’ve coached with over the years. I’ve been around the game in Connecticut since 1987, when I came over to play. Connecticut has been my whole playing and coaching existence so it’s very nice.”

Schuppert understands the company he’s surrounded by and has great respect for his boss.

“He’s (Steve) another guy who knows a ton of guys in soccer and whatever Steve does or touches usually translates into bigger and better,” Schuppert said. “If you look at what he’s done with the youth program CFC. He’s a co-owner of that, has over 50 girls teams and over 40 guys teams.”

If Coxon can continue his success in the sport, Schuppert believes CFC Azul could quickly turn into a great soccer franchise.

“He’s a co-owner of this arena, has his own soccer website,” Schuppert said. “He’s a business man who has a passion for soccer.”