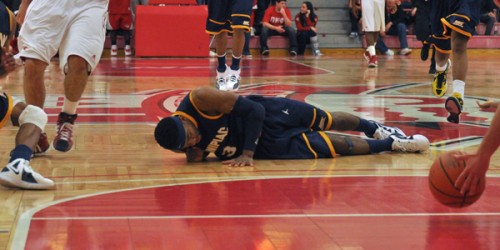 The Quinnipiac men’s basketball team is well known for its ability to dominate under the boards during games, but on Thursday they were unable to come up with the key rebounds down the stretch against Sacred heart, and eventually fell, 78-75. 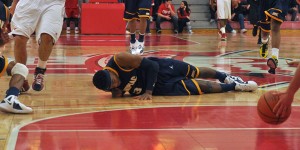 [/media-credit]With the Bobcats trailing 72-71 with 2:25 remaining, things began to unravel as Louis Montes hit a layup to give the Pioneers a three point lead. Dave Johnson then turned the ball over on the inbounds, allowing the Pioneers to take another 30 seconds off the clock.

With 1:03 and 35 seconds remaining in the game and the Bobcats (9-9, 2-5 NEC) trailing 74-73, Sacred Heart grabbed two key offensive rebounds, forcing the Bobcats to foul and send the game to the free throw line.

Montes hit two free throws for the Pioneers with 31 seconds remaining, giving them a 76-73 lead, and eventually the victory.

The Bobcats had a chance to tie the game in the final 30 seconds as James Johnson took a three-pointer with 14 seconds remaining, but it did not fall and Sacred Heart’s Evan Kelley came down with the rebound.

Johnson finished with 16 points in the game, but shot 2-for-10 from three-point range.

“It’s hard for us if he shoots two for 10 from the three,” Moore said. “Offensively we need him, its how we won the Robert Morris game, it’s how we won some of our big games when he makes his shots.”

The Bobcats did have a glimmer of hope as the clock winded down. Kelley sank two free throws to give the Pioneers a 78-73 lead but fouled Dave Johnson who heaved a desperation three-pointer from full court. Dave Johnson sank the first two shots, then attempted to miss the last one in order to set up a three-pointer at the buzzer, but it did not work and the game promptly ended.

Montes was the game’s leading scorer with 28 points. Shane Gibson added 23 points, 18 in the second half, as well as eight rebounds.

The Pioneers also shot 8-for-15 from three-point field goal range while the Bobcats shot 4-for-19 from beyond the arc.

The loss for the Bobcats drops them to eighth place in the NEC standings, and also was the sixth loss this season decided by five or less points.

Moore indicated there is only one thing that needs to change for them to win those games.

“Defense. We need to be tougher. We need a tougher edge,” Moore said.

The Bobcats continue their conference schedule when they visit Bryant on Saturday at 4 p.m.