The Quinnipiac men’s basketball team set a new program record for rebounds in a game on Saturday with 61, but the effort on the glass wasn’t enough to beat the Northeast Conference preseason coaches’ poll favorite, as the Bobcats lost, 79-75, to Long Island University at TD Bank Sports Center.

“I think we are doing one thing well and that is offensive rebounding,” Quinnipiac men’s basketball coach Tom Moore said. “But I don’t think we created great shots and we made a lot of bad decisions on shot selection and missed foul shots again.” 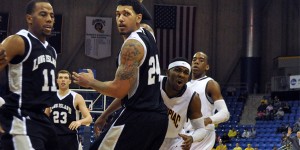 Going into the game, the Bobcats were second in the nation behind only North Carolina in rebounds per game at 44.1. Quinnipiac had 42 rebounds after the first 20 minutes of play and finished the game with 27 rebounds on the offensive end. The 61 total rebounds are an NEC record.

“I know last game we lost the rebounds to St. Francis (N.Y.) so we wanted to get our identity back and we do a lot of rebounding and box out drills in practice,” senior guard James Johnson said. “We wanted to play Quinnipiac basketball. Put a body on the big guys and rebound the ball.”

Quinnipiac (8-7, 1-3 NEC) headed into the half tied at 37 with the Blackbirds. However foul trouble and Blackbird forward Jamal Olasewere allowed Long Island (10-6, 4-0 NEC) to pull away.

LIU Brooklyn extended the lead to 13 with 5:04 remaining in the game on two free throws by Jason Brickman. The Bobcats quickly cut into the deficit and narrowed the lead to three after two made free throws from Zaid Hearst with 14 seconds remaining. But the clock ran out on the Bobcats as they were unable to keep Long Island off the free throw line.

Olasewere had a game high 24 points including 15 in the first half on 8-of-12 shooting. He also went 8 of 10 from the foul line and gathered 11 rebounds.

“Olasewere is a very talented offensive player,” Moore said. “Very hungry, aggressive offensive player. He came hungry to play and was excited about scoring. Ousmane (Drame) wasn’t up to the task defensively. Rebounding wise he was but he’s not quite ready for that. Jamal has 80 games in college under his belt Ousmane has 13 or 14. He wasn’t ready for the speed of when you’re closing out a kid like that.”

Freshman Justin Harris had played one minute since Dec. 6 due to an ankle injury and helped fill some of the weight for an injured Jamee Jackson. Harris saw 24 minutes on the court and contributed nine points and eight rebounds as Jackson missed his fifth straight game.

“(Harris) stepped up big today,” Johnson said. “He’s always ready to go and has been rehabbing hard. He works hard in practice and has been playing very well the last couple of days so it rolls over to the game.”

Quinnipiac finds itself in an unfamiliar position sitting at the bottom half of the NEC standings with four road conference games in front of them.

“Mindset is one game at a time,” Johnson said. “You can’t look too far down in the schedule. This conference schedule comes down to March, so we have to keep getting better and stay one game at a time and get that one. No panic.”

Quinnipiac will face Robert Morris on Thursday in Pennsylvania.