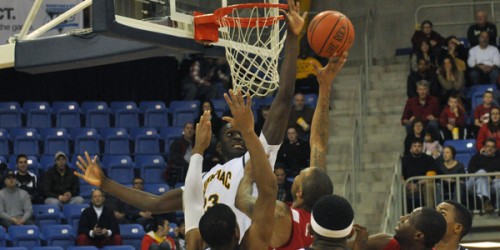 Jamee Jackson was wearing a boot on the bench. Boston University was double-teaming Ike Azotam.

It was the perfect time for Ousmane Drame, a 6-foot-9 freshman, to step up in the post. 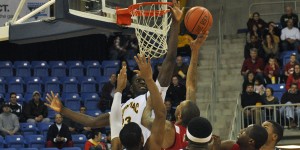 Drame recorded his second career double-double and blocked six shots, including two in the final 30 seconds, to lead Quinnipiac to a 59-53 comeback win against Boston University Saturday at TD Bank Sports Center.

Drame scored 10 points – all in the second half – and brought down 14 rebounds for the Bobcats (8-5), who have won six of their last seven heading into Northeast Conference play.

Quinnipiac played its third straight game without Jackson, a junior forward who injured his foot before the team’s game against Niagara Dec. 22. Azotam scored four points, his second-lowest scoring output of the season.

“Somebody needed to step up and I got called on,” Drame said.

Drame blocked two layups by Darryl Partin with 26 and 22 seconds left to preserve a 54-50 lead.

“The 14 rebounds and the six blocks in a game like this is real impressive,” Moore said.

Azotam, who had averaged nearly 25 points the past three games, has eight double-doubles this season, which ranks third in the country, and is in the top-10 in the country in rebound average and offensive rebounds.

“I think Ike was caught by surprise by how big a target he’s going to have on him,” Moore said. “He’s a national top-10 offensive rebound guy too. Today was probably one of the early times in which you could tell BU put focus on stopping him.”

Since Jackson’s injury, Drame has stepped up, as he has averaged 9.7 points and 10.3 rebounds in the three games. Drame said the forwards have all been seeing more action in practice with the absence of Jackson, who could miss up to four more weeks.

“The fact that Jamee’s not there makes it harder and harder and harder, even at practice,” Drame said. “Some of us don’t get any rest because we rotate our bigs but the fact that we’re down on bigs, we have Jamee and Justin (Harris) out, we have to keep focusing on everything and keep working hard.

“It sucks that he’s out but I guess this is a chance for me to prove myself and play harder and do what I need to do to get more playing time.”

Freshman guard Zaid Hearst scored 11 of his 13 points in the second half and recorded seven rebounds, James Johnson scored 16 points for the Bobcats, who trailed 32-19 at halftime.

Partin scored a game-high 19 points and recorded nine rebounds and Matt Griffin scored 11 points for the Terriers, who have lost six in a row.

Hearst and Johnson scored nine points within the first three minutes of the second half and Azotam made a dunk to cut a 13-point halftime deficit into two, 34-32.

After Dom Morris made a layup to give BU a 42-38 lead with 7:51 to play, the Bobcats held BU without a field goal for the next seven minutes. Quinnipiac held BU to 25.9 percent shooting in the second half.

“I thought we were really sharp defensively,” Moore said.

Freshman guard Nate Gause hit a 3-pointer from the left corner with 6:40 to go, and it was the last Bobcat field goal. The Bobcats made 18 of their last 22 free throws and shot 90.3 percent from the foul line in its previous game against Colgate.

Johnson hit the game-tying and go-ahead free throws with 5:59 to play after Travis Robinson fouled him going up for a layup. Drame, Hearst and Garvey Young combined to score the next nine Bobcat points – all from the foul line – and Johnson hit two more free throws to go up 54-48.

Dave Johnson fouled Partin on a layup attempt with 32 seconds to go. Partin missed the free throw, but got his own rebound and went to lay it in, but Drame swatted the ball away. Partin got the ball again, but Drame was there and knocked it out of Partin’s hands again.

“I just happened to be there,” Drame said.