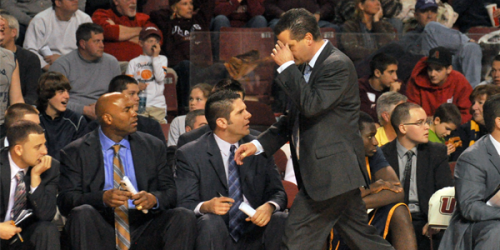 For 35 minutes, Tom Moore’s Bobcats outscored UMass by 13 points. The Minutemen dominated the other five minutes.

UMass went on an 18-0 run to start the second half as Quinnipiac lost 72-67 Saturday at Mullins Center. 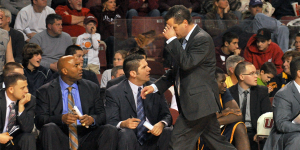 [/media-credit]“It was too much to recover from,” Moore said. “I’m really shocked that the lead can go and make a 20-point swing in five and-a-half minutes. I didn’t see us collapsing as drastically as we did during that stretch.”

“I’ll have to watch the tape tonight to really dissect why it was as bad as it was during that stretch of the game,” Moore said. “It was pretty drastic. You don’t see games go that way when you look at it.”

The Bobcats (5-5) cut the lead down to three, 70-67, on a layup from Ike Azotam with 58.5 seconds to go, but Raphiael Putney made two free throws with 8.9 seconds left to make it a two-possession game.

“Today I just got an opportunity to seal the game for my teammates,” Putney said.

Putney had the opportunity thanks to Sean Carter. Carter recorded an offensive rebound after Chaz Williams missed two free throws with 12 seconds left to prevent the Bobcats from having one last chance.

“We needed those,” Williams said.

Three different Minutemen scored in double figures and six had at least five rebounds. Terrell Vinson had 13 points and eight rebounds, Williams had 14 points and Putney scored 12 points for the Minutemen.

James Johnson had 22 points but recorded his fourth foul seven minutes into the second half.

“I think we lack one more creative ball handler, penetrating guard,” Moore said. “When James got his fourth we were playing with Dave Johnson a little bit on fumes and giving up almost a foot on some of the guys that were playing against him in the press and a bunch of small forward-types out there against pressure.”

Azotam recorded his ninth career double-double, scoring 22 points and bringing down 13 rebounds. Dave Johnson shot 1 of 8 from the field and Jamee Jackson was held to just five points.

Jackson, who had averaged 16.3 points per game in the last three games, had three rebounds and three turnovers in 33 minutes.

“He got picked a couple of times when he tried to put it down in traffic and I think the sheer size at the rim … UMass is a much bigger team and a more athletic team than anyone we’ve played by far,” Moore said.

The Minutemen trailed 40-36 at the half before Putney started the run with a 3-pointer from the right wing. Putney then sent a pass to Sean Carter for an alley-oop dunk. Vinson followed with a 3 of his own before Moore called the team’s second timeout.

But nothing could control the Minutemen. Jesse Morgan scored five straight points and then Williams and Vinson combined for the next five points.

“I thought they hit us a couple of times during the game with the flurry with their style of play,” Moore said. “I didn’t expect their flurry to be as complete as it was at the start of the second half.”

The Minutemen shot 70 percent from the floor during the stretch, including 60 percent from behind the arc. Quinnipiac missed its first seven shots of the half.