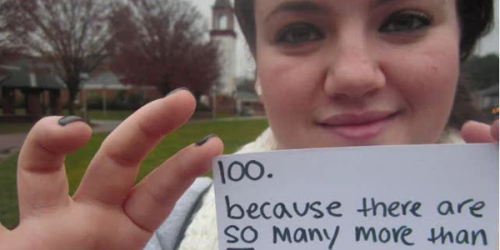 What began as a QU301 final project has transpired into a viral video uplifting the Quinnipiac community.

In their QU301 class, Global Perspective on Death and Dying, juniors Lauren Taylor and Michelle Brandow created a video, “100 Reasons to Stay,” for their final capstone project, Taylor said. As of Friday, the video had more than 27,000 views.

Update: The video was featured Saturday morning on one of Perez Hilton’s blogs.

“The goal of the project was to teach the public something and make a change,” Taylor said. “We chose suicide because I had a tumblr on grief and Michelle had a twitter on suicide prevention already for a project in the class. We wanted that to be the change, the way people look at suicide.

“When people talk about suicide, it is always depressing,” Taylor said. “We wanted something that was more uplifting.”

The video that they posted to Vimeo shows Quinnipiac students holding up index cards of 100 reasons to keep living.

Professor Joan Kreiger is overwhelmed by the effort of her students.

“Michelle shared with the class that ‘this is the most important thing she’s ever done,’” Kreiger said. “As a professor, I can’t think of any greater satisfaction than to hear a student say that. What a testament to her commitment to make a difference.”

Brandow never excepted the response that they have received in only a few short days.

“This is way bigger than we ever intended,” Brandow said. “We put this up and wanted people who helped us to see it. Because of the amazing responses, I have every intention of maintaining my twitter on suicide prevention because it wouldn’t be fair to all the people it helped.”

Taylor and Brandow have received many amazing responses from the video, but one in particular touched them, Brandow said.

“Someone emailed us a ‘thank you’ from a suicidal high school student who saw our video,” Brandow said. “She is now working with her counselor on her own 100 reasons to stay.”

The tremendous response is because of the message their video gives, Krieger said, that there are others out there that care about them.