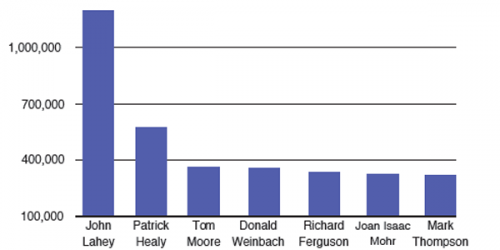 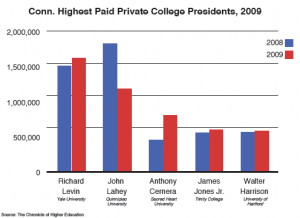 President John Lahey earned $1.2 million in total compensation for 2009, making him the second highest paid private college president in Connecticut and the 27th in the nation, according to the Chronicle of Higher Education.

His 2009 salary had a 35 percent drop from 2008, when he made $1.8 million (which was almost three times the $600,000 he made in 2007). Last year, the university said his total compensation in 2008 included a “large one-time reimbursement for major repairs and renovations to the president’s 23-year-old house,” which amounted to over a million dollars. When asked about his 2009 salary, Lynn Bushnell, vice president for public affairs, declined comment, saying “the university does not comment on salaries or other personnel matters.” 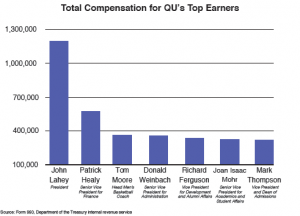 Quinnipiac has one of the top 20 highest president/professor pay ratios in the nation, according to the Chronicle of Higher Education. Lahey makes about eight times as much as professors. The average compensation for Quinnipiac professors was $149,600 in 2009.