What goes into making a mask? 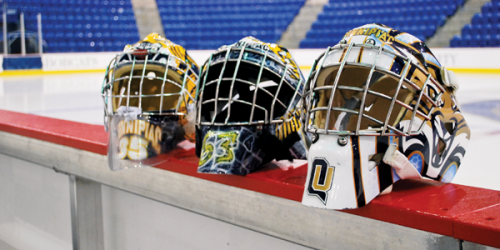 Quinnipiac men’s ice hockey goaltender Eric Hartzell won the College Hockey Inc. goalie mask contest on Nov. 15, defeating Minnesota’s Kent Patterson in the finals. We caught up with Hartzell and women’s ice hockey netminder Victoria Vigilanti to discuss what went into the design of their masks.

Q&A with Eric Hartzell
Describe what is on your helmet.

I like to be pretty simple with my designs. Rand [Pecknold], he came up with the idea of putting a nice big Bobcat logo on both sides with my freshman year helmet. I liked it, thought it was pretty cool. When I wanted to look at ideas for my next helmet I thought it would be a good idea to continue that.

The colors are a lot different than my freshman year. Both Coach and I decided it would be pretty cool to get some neat colors in there. The artist did a really good job of doing that. We

added the Bobcat paw on the top. On the back, I had to put my home state. It’s something I always wanted to do. [There are] trees in the background because Minnesota is kind of a woodsy area. It’s nice. I think the artist did a great job on it.

Did you try to design it to reflect your personality?

I don’t know. For a lot of people, yes. Like I said, I like my stuff really, really simple so I suppose it does when it comes to art because I was an artist growing up. When I was a kid I wanted to do this kind of stuff.

I think just the simpleness in general shows what I like …. Obviously, Minnesota was a big part of my life since I grew up there for 18 years. I did want to make sure I got that on there. The trees, I think, is just the beauty of Minnesota …. I had to put that on the back and obviously the star from where I’m from. I got a lot of memories from there.

Have you ever tried to design a helmet yourself?

With this background, I didn’t draw it out with the specific details. I haven’t personally ever tried. I’m just an artsy person. I just draw some random things here and there on a piece of paper.

In art class I got into it a little bit but I wouldn’t say I ever really tried with a helmet. It’d be something that I’d be really interested in.

Do you ever try and design it to be distracting to opposing skaters?

Not really. If anything I’d rather have a big bullseye on my chest or something. People like to have artsy stuff on their helmets. For a lot of people it’s their personality on their helmets. I don’t think people focus too much on distracting shooters unless there’s a big arrow or something on your chest.

Describe what it’s like to be looking through the mask.

When you’re on the ice you don’t really think about it. It’s just another helmet…. It just comes natural at that point. You just go out there and do what you’ve done since you were 3 years old. For me, I started skating when I was three, so I don’t even think about anything when I go on the ice.

How did you get into playing goal?

I don’t even know to be honest with you. One day, I was in squirts. It was my first year except I had started early. I didn’t make the ‘A’ team and I really, really wanted to make the ‘A’ team. The coaches were saying that there were some spots for goaltenders and if I want to try to be a goaltender I might have another opportunity.

So I tried out as a goaltender. I didn’t make it but I did like it at that point. Up until ‘A Pee Wees’ I was always a goaltender and a forward. Then finally ‘A Pee Wees’ came along and I started excelling more at goaltending and I’ve been there from then on out.

Q&A with Victoria Vigilanti
Describe what is on your helmet.

I have a brick wall in the background. I made it Quinnipiac colors, navy blue with a little tint of white, just so it fits in well with the colors. I have the Quinnipiac crest on the side, another Bobcat on the other side. I have the Bobcat coming out the top.

The back plate is where the goalies can personalize what they want. I have the Canadian flag because I’m from Canada and want to represent where I’m from.

I also have this kind of a little joke that I have with my best friend from home. … We bought a fish one day and I had the best game of my life. … So on the back plate I have my fish, call it Fishy. Then I have my last name just in plain white.

Do you try to design it to reflect your personality?

Yeah. I like humor so that’s probably why I put the fish. And you can’t really go very far with the front because you can’t add anything that’s not Quinnipiac related. So I just kept it original. If I get another helmet I’ll probably do something spicy because it’s my senior year.

Describe what it’s like to be looking through the mask.

When you’re looking through the helmet you can see everything. It’s your ice. There’s nothing on the ice you can’t see.

The helmet is the base of where you are looking out. If you have great equipment, you have a great helmet, you have that confidence and when you’re looking at the puck, the puck is looking right back at your helmet. You have the whole vision of the ice and the helmet is one of the main parts of the goal because it kind of describes who they are.

Who helped designed your current helmet?

It was me, coaches, and our equipment manager Jamie. I gave my ideas to Jamie, with coach’s rules and then we sent them over to our paint guy. He just went with my ideas and made it the best he could.

What do you think about when you’re by yourself on the ice?

Well I’m kind of a freak. I have a lot of superstitions. I talk to myself the whole game. I say ‘Just don’t think about nothing.’ There’s never a time on the ice when I’m not talking, it’s either with my teammate or it’s with myself.

How did you get into playing goalie?

Since I’m from Canada, my family is a huge hockey family. There was no way we weren’t going to be playing hockey. My goalie went on vacation, my dad was actually the coach, and no one else wanted to go in net. It was the playoffs, so my dad was like, ‘Ok. You have to go in net.’ So I strapped up the pads, let in nine goals, don’t think I made a save, but I loved it. I just kept going from there. I got goalie training and I’m here now.