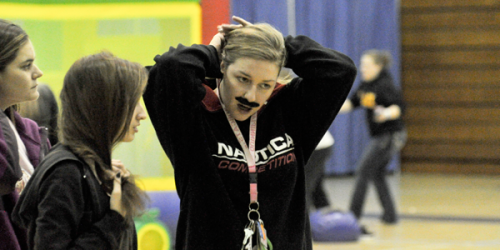 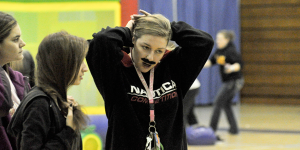 [/media-credit]
Burt Kahn Court filled with beards and brothers on Dec. 2 in support of Delta Tau Delta and the Movember Foundation. Throughout November, the fraternity put aside its razors to raise money for the foundation, which promotes awareness of prostate and testicular cancer.

On Nov. 1, the clean-shaven brothers vowed not to shave for the entire month to raise awareness.

“I see someone and they say ‘Hey Zack, why do you have that ridiculous facial hair on your face?’ And I’m like, ‘Well, I’m glad you asked. It’s actually to raise awareness for prostate cancer,’” said Zack Schwartz, a senior and external vice president of Delta Tau Delta.

While some brothers sported beards, others took part in the tradition of “fine moustachery,” keeping a groomed “mo.”

Members of Greek life and other students came to support the event, which had a deejay, raffle prizes, a live band, an obstacle course and food from Tonino’s.

The fraternity set up an online donation portal, and raised money throughout November via donation letters and selling hats, T-shirts, and wristbands in the student center.

When Delta Tau Delta started at Quinnipiac in 2009, the fraternity chose the Movember Foundation to be one of its philanthropies.

“This cause matters to me because as a fraternity we can come together to promote awareness for men’s health, and gain campus support to raise money,” said Brendon Fazio, a sophomore and member of Delta Tau Delta.

Movember originated in 2003 in Melbourne, Australia, and since then has grown to include more than one million participants worldwide. In the 2010 U.S. campaign, Movember raised $7.5 million, 83 percent of which went toward men’s health programs.

Even with the Movember support, not every brother enjoyed letting his facial hair grow out.

Sophomore Lee Schwartz, the fraternity’s philanthropy chair for spring and fall 2012, said he shaved his beard after three weeks because he did not want to be the center of attention at Thanksgiving with his family.

According to cancer.net, prostate cancer is the second leading cancer-causing death for men. For 2011, a projected 240,890 men in the United States will be diagnosed with prostate cancer and about 14 percent of them will not survive.

Testicular cancer is most common in men ages 20 to 45. For 2011, nearly 8,000 men in the United States are expected to be diagnosed with testicular cancer, and about 4.4 percent of them will not survive.

According to cancer.net, testicular cancer is among the most common types of cancer that can affect teenagers.

“I don’t actually enjoy having the facial hair. It’s really itching and annoying,” Zack Schwartz said. People ask me why I look so ridiculous and although it’s not the most comfortable thing, I’m raising awareness for a good cause.”