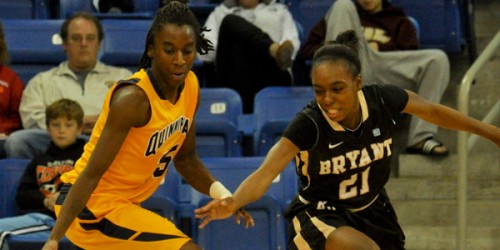 Felicia Barron made Bobcat history Saturday afternoon on Lender Court at the TD Bank Sports Center, as the Quinnipiac women’s basketball team defeated Bryant in the first conference game of the season, 67-56.Barron recorded a program record of 12 steals, shattering the previous high of eight, and currently leads the nation in steals with 43. Barron also shot 6-for-14 from the field.

“I’m still going to play my game as I play it, this one’s a conference game and these are games that really matter, so I just played my heart out and gave it all I had,” Barron said. 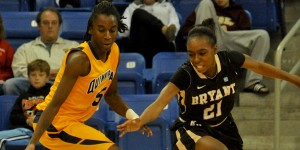 Barron’s defensive effort helped lead the team to total 20 steals in the game, the most the Bobcats have recorded in a single game since 2006.

“Her effort on the defensive side is phenomenal, people are scared of Felicia Barron on both sides of the ball, and it’s a lot of fun to watch. It was an amazing individual performance to go make those plays happen for her team,” Quinnipiac head coach Tricia Fabbri said.

The Bobcats and Bulldogs played neck and neck basketball as they were within six points of each other for the first 12 minutes of the game. But QU began to pull away with five minutes left in the half with three-pointers by Barron and Jasmine Martin before going into halftime with a 41-33 lead. Martin shot 50 percent from the field, and led the attack with 18 total points. Brittany McQuain also played a role, recording 11 rebounds on the day.

In the second half, Quinnipiac continued its success on the offensive side of the ball, and extended its lead to 25 points with 4:12 left in the game. Bryant responded with 14 unanswered points, yet it proved not enough as the Bobcats walked away with a 67-56 win.

“I thought today’s performance, aside from the first few minutes, we just completely took over. I thought we executed offensively and defensively extremely well, for 30 minutes of that ball game today,” said Fabbri.

The Bobcats square off against Sacred Heart in their second conference match of the season at the TD Bank Sports Center Monday night. Tip off is 7 p.m.