Moore: Arrests not a distraction in 68-55 loss to Sacred Heart 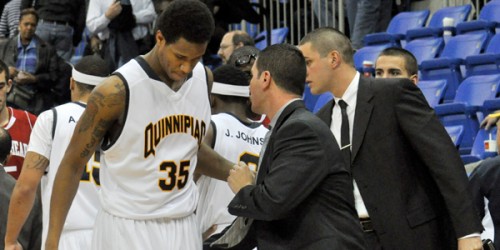 Quinnipiac guards Dave Johnson and Nate Gause and forward Jamee Jackson had been arrested earlier in the day on assault charges stemming from an on-campus fight on Sept. 18. The three combined for just seven points and seven turnovers.

Quinnipiac head coach Tom Moore said that the incident had no effect on the team’s efforts, and senior guard James Johnson, who was also involved in the case, echoed his sentiments.

“Once we step inside those lines, it’s all about basketball,” James said.

The Bobcats struggled from the field converting 31.3 percent of their shots throughout the game, and their 55-point performance was their second-lowest on the season. Forward Ike Azotam led the way for the team with 18 points, and James contributed 15.

“We’re not shooting the ball from the outside real well too,” Moore said. “We have to work hard to get a good shot and we’re not making open shots either.”

Sacred Heart (5-3, 1-0 NEC) controlled the pace early on, as guard Shane Gibson, who finished with 21 points, led an early attack with six points in the first two minutes of play. Forward Chris Evans would also aid Sacred Heart in the first frame with nine points. After being down 11-8 with over 13 minutes to play, the Pioneers would come back and never trail again.

The second half saw Quinnipiac attempt to mount a comeback behind strong scoring outputs by Azotam and James Johnson, but nobody else was there to answer Moore’s cry for shots.

Even as the game reached a six-point deficit at 55-49 with six minutes left, Sacred Heart built a 9-0 run that lasted four-and-a-half minutes and saw James Johnson and fellow guard Garvey Young foul out shortly after, and the Pioneers cruised to victory.

Moore’s Bobcats also struggled from the free-throw line, going 9-of-20 from the strip. Sacred Heart was able to convert 20 out of their 29 attempts. Even though they won the battle of the boards 45-39, the Bobcats also out-fouled the Pioneers 23-19.

“We don’t have a collective will yet,” Moore said. “We haven’t handled the tough things that have happened to us.”

Outside of Azotam and James Johnson’s double-digit performances, the Bobcats received no help on the scoring end. Young and guard Zaid Hearst each added five points, which was the next-highest scoring output. Even so, James said much of the blame is on his own leadership quality.

“I just didn’t push the right buttons to get the guys ready for a league game,” he said. “I feel like I failed overall in the last couple days, and I just have to shake it off.”

Additionally, Dave’s rocky start has been an area of concern for Quinnipiac. Dave went 0-for-8 on field goals Thursday night in 25 minutes of action, and is averaging just 5.2 points per game on the season.

“If he just relaxes on the court, he’ll get better results. I’m not really worried,” James said. “This team just needs to focus on defense first, it’s not about offense. The offense is second nature for this team.”

“We have clearly a lot of things we need to improve on,” the coach said. “I see as much emotional and mental fatigue as I see physical fatigue, and it makes me second-guess myself as coach.”

The Bobcats will remain home to face Bryant (1-6, 0-1 NEC) in yet another conference battle on Saturday at 3 p.m. James Johnson said his team needs to stay focused.

“When it comes down to the big grand scheme of things, the only thing that matters is the three big games in March,” the senior guard said. “There isn’t an urgent need to get better, but losing three-in-a-row is tough.”