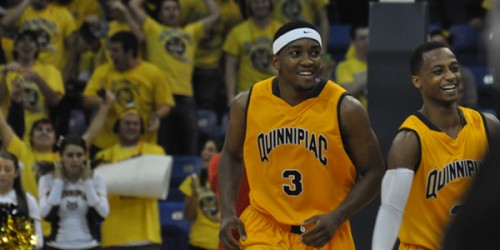 James Johnson released a 3-pointer from the wing and let all his emotions fly out. The crowd at TD Bank Sports Center erupted as Johnson waved his hands up in the air, pumping the 2,744 people up as Yale head coach James Jones called a timeout. 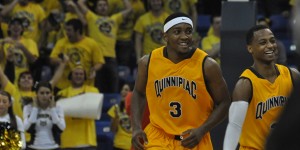 In his season debut, Johnson scored a game-high 25 points and played 37 minutes Tuesday night, as the Bobcats defeated the Bulldogs, 68-62.

“James Johnson made a couple of big baskets,” Quinnipiac head coach Tom Moore said, “and that was just enough.”

Johnson was suspended for the season opener against Fairfield last Friday for disciplinary reasons, as he sat on the bench and watched his teammates fall to the Stags, 72-60. He was eager to be back on the floor Tuesday.

“It hurt me a lot seeing them against Fairfield knowing I couldn’t do anything,” Johnson said. “So just being out there with my guys and just being tired with them, running up and down with them, just helped a lot.”

Johnson had started in all 96 games as a Bobcat since his freshman year before Moore suspended him for an incident that took place Sept. 18. His return to the floor was a moment he highly anticipated.

“I was practicing all summer just wanting to get back out there,” said Johnson, whose consecutive game streak was a program record.

Johnson finished 8 for 20 from the floor and 3 for 9 from behind the arc Tuesday. Moore played freshmen Zaid Hearst and Nate Gause for more than 30 minutes in Friday’s loss, whereas Tuesday they played 22 and 14 minutes, respectively.

“His 37 minutes are 37 minutes that I’m not giving to somebody who’s young or tired. On Friday night, those 20 shots and 37 minutes were parceled out to guys that aren’t quite ready to handle that many, so it just gives us a big-time scorer and it takes a lot more pressure off the other guys.”

Hearst and Gause combined for 19 points on 6-for-17 shooting Friday. They combined to go 0 for 8 from the field Tuesday and both had four fouls.

Johnson was the first one out of the locker room and first one to take warm-up drills before the game.

“It felt real good being out there, seeing yellow and just embracing the love from the fans,” he said.

And Johnson hit the ground running. Within the game’s first minute, Johnson stole the ball from Yale’s Austin Morgan, dribbled down the right sideline and laid the ball into the hoop for the Bobcats’ first points of the game.

“I just basically keep playing hard on defense so I can generate my defense into offense and that’s how I usually get my points,” Johnson said.

After that point, Johnson went cold, shooting 1 for 9 from the floor, recording just nine points at halftime. Then he heated up.

Starting with a layup, Johnson made six of his last 10 shots in the game and scored 16 points in the second half.

Johnson hit 3 from the right wing – the first 3-pointer for the Bobcats since 5:42 left in the first half in Friday’s game – over Isaiah Salafia to give Quinnipiac a four-point lead with 14:41 remaining.

With the game still close – 44-43 with 11:09 left – Johnson put the ball into his own hands like the many times he has in the past, as he hit another 3 in front of his own bench.

After Jamee Jackson had a two-handed, put-back slam dunk that sent the crowd into a frenzy, Johnson hit another jumper over Michael Grace to cap an 8-0 run and give the Bobcats a 51-43 lead with 9:22 remaining.

It didn’t matter who was covering Johnson; he was making his shots.

“It doesn’t matter who’s guarding me,” Johnson said. “I just try to stay with them and do what we do and run the offense and just do what Coach tells us.”

The Bulldogs cut the deficit to within five once, but with 4:09 left, Johnson hit another 3 from the left wing for the dagger to give the Bobcats a 60-50 lead.

Jones called a timeout to try to cool down Johnson’s hot streak, but no one could contain him or the TD Bank Sports Center crowd.

Moore said he’s seen better out of Bo, who put up 38 points against Robert Morris and scored eight points (including the game-winning layup) in the final minute against Mount St. Mary’s last year.

“James’s numbers are better than he played,” Moore said. “I think sometimes we’ve seen him play better. To my eyes, it was sort of an average game by him and he has 25 … It speaks for itself.”

Johnson didn’t have a chance to show Fairfield what he could do, as the Bobcats had just one field goal in the game’s last five minutes. Now the team knows how he can change a game.