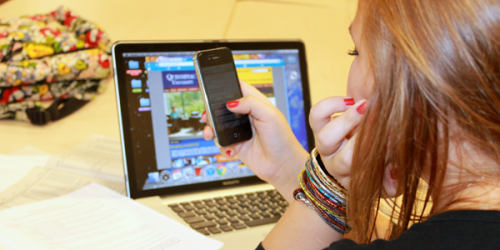 In an age where the BlackBerry is known as the “CrackBerry,” Android users are “Droiddicts,” and iPhone lovers are deemed “iPhonatics,” it’s no wonder Generation Y members are known for their tech-savvy abilities.

Cellphones equipped with features such as web browsers, email and apps are labeled as smartphones. While these devices may be “smart,” their never-ending blinks, beeps and vibrations can add to college students’ stress levels.

Dr. Alfred Bradshaw, also known as “the stress doctor,” is a part-time sociology professor at QU and a professional time and stress management consultant.

According to Bradshaw, factors such as relationships, grades, studying and worldwide current events are major causes of stress among college students.

“College students are certainly not exempt [from stress],” Bradshaw said.

He agrees that technological advancements such as smartphones can also act as stressors.

“We always feel like we have to be on all the time and our technology keeps getting better and better and keeps us more connected,” Bradshaw said. “There’s no downtime.”

A July 2011 survey was conducted by the Pew Research Center to measure smartphone ownership. The results concluded that 83 percent of U.S. adults own a cellphone, and 42 percent have a smartphone.

“Android phones are especially common among young adults and African-Americans, while iPhones and BlackBerry devices are most prevalent among college graduates and the financially well-off,” the Pew Center report said.

For many college students, cellphones aren’t just luxury pieces of technology – they are necessary appendages.

Stress can manifest itself in both short- and long-term effects on the body, according to Bradshaw. Stress effects include everything from insomnia and trouble concentrating to increased illness susceptibility. Stress can also interfere with the body’s sex hormones, specifically affecting women’s ovulation and men’s sperm motility.

Senior Jessica Attard describes her relationship with her Android Samsung Galaxy S as “love-hate.” On average, Attard said she receives an estimated 50 emails and text messages every day.

“At times I love getting emails to my phone because if they are important or pertaining to something I really need in that moment it’s helpful,” Attard said. “But at the same time I can get really frustrated.”

Senior Adam Hoffman is writing his psychology thesis on variables that affect students’ academic motivation. Hoffman said smartphones cause stress among some students because they act as distractions.

“[Smartphones] are mediators of stress,” Hoffman said. “I think technology inhibits people from dealing with their problems and their stress because they can keep going back to Facebook or their email or whatever, and kind of avoid what they need to solve and the problems they need to think about.”

Freshman Natalie Randazzo receives more than 100 emails and text messages every day on her RIM BlackBerry Tour. Like Hoffman, she agrees that her smartphone interferes with her daily responsibilities.

“My smartphone does add to my stress level at college because instead of doing my work, I’m always on my phone,” Randazzo said.

Bradshaw says this need to be technologically connected is a result of the human desire for socialization.

“I think it’s because we’re such social animals that we always want to be in touch with people,” Bradshaw said. “We always want people communicating with us. We want to feel connected and feel like we’re part of what’s going on out there.”

Junior Jessica Kraus served as Phi Sigma Sigma philanthropy chair, and in her position received an estimated 50 emails per day on her Apple iPhone 4.

“[Smartphones] make you stressed because people always find a different way to get in touch with you,” Kraus said. “But at the same time it does keep you organized.”

Many smartphones give users the ability to see when a message is read, or when someone is responding. Kraus describes this smartphone messaging feature as “creepy.”

“You feel stressed to respond and answer, and when you don’t people will find a way to get you,” Kraus said.

In terms of college life, stress is common and sometimes unavoidable. However, there are several ways to fight and relieve stress.

According to Bradshaw, students can reduce stress by getting enough sleep, eating balanced meals, exercising regularly and improving their time management skills.

For those who succumb to tech stress, Bradshaw recommends focusing on one task at a time.

“Students buy into the idea that they can multitask and at the same time be texting or available for phone calls,” Bradshaw said. “And that’s a case of people fooling themselves because there’s not an advantage to thinking that you can multitask.”