This is me: A hero’s son 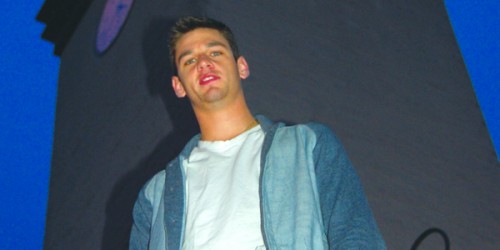 Keith Palmer doesn’t like to talk about what happened to his dad on Sept. 11, 2001 with anyone except family and close friends. Keith was only 11 years old and the rest of that week is now one big blur in his mind. One thing he does recall, though, was his mom sitting him and his two sisters down in his house and hearing her say that his dad wasn’t coming back.

His dad, Orio, single-handedly fixed an elevator in the South Tower of the World Trade Center on 9/11 and rode it up 40 floors. Then, wearing about 50 pounds of bunker gear, he ran up 38 flights of stairs to find hundreds of people in dire need of help at the impact zone, where the second plane had hit the South Tower.

Orio, 45, was the battalion chief of Engine Company 3 and Ladder 12 in Chelsea of the New York City Fire Department and the only firefighter to make it up to the impact zone of the South Tower.

“Anyone who was wounded or dying – to know somebody was able to get up there, they knew there had to be a way out. For people who were there at the point of impact to have seen him, I can only imagine, it must have been some elation or euphoria that’s probably indescribable. Just to see him, and to realize there’s some hope here thanks to this guy who just made it up here,” Orio’s brother Stephen said in “9/11: Phone Calls from the Towers,” a 2009 documentary.

Seven minutes after Orio’s last radio transmission calling for help, the tower collapsed, killing nearly 1,000 civilians and firefighters, according to the documentary.

His mom gave him a pendant necklace a few years ago and he hasn’t taken it off since. He also keeps a 5-by-7 framed portrait of his dad wearing his firefighting gear near his bed at all times, even when he goes home for just a weekend.

He rarely mentions his dad to anyone besides his family and close friends.

“I don’t want to put other people in uncomfortable situations,” he said. “I don’t want other people to be like, ‘Oh, I’m sorry.’ Then it just feels awkward.” But after seeing his dad featured in “9/11: Phone Calls from the Towers,” Keith found a way to talk about his dad with his friends – through Facebook – 10 years and a day after the tragedy.

His post read, “documentary from the history channel…go to 16:30. thats my dad,” with a link to the video attached. When he checked his Facebook the next day, he saw that more than 90 people had liked the status.

“I got a bunch of private messages on Facebook and text messages of people saying, ‘Keith, I always knew about your dad but I didn’t know that he was truly a hero and that you should be proud to be his son.’ That makes you really appreciate how other people don’t forget,” Keith said.

Keith’s sister, Dana, speaks of her dad more openly than her younger brother. “Since his entire life wasn’t 9/11 – I’m able to talk about that too – remembering him in a happy way is also easy to do,” she said.

Dana is two years older than Keith and completed the MAT program for elementary education at Quinnipiac in 2009.

“Even though he’s younger than me, I look up to him,” she said. “I know he is very, very protective and always looking out for Alyssa (his younger sister) especially at school. My dad would be very proud of him and the man that he’s become.”

Alyssa, a sophomore at Quinnipiac, said she looks up to Keith, too.

“It wasn’t a good thing that happened, but it definitely made us a lot closer,” she said. “We have a lot of respect for each other.”

Keith was attending the Wheeler Avenue Elementary School in Valley Stream, N.Y., that Tuesday when he first heard there had been an attack on the World Trade Center. As usual, his neighbor picked him up from school later that day.

“I remember her saying, ‘Your parents are OK, they’re fine, we’re just going to take you home and we’ll find out later,’” Keith said. “Then basically the rest of the time after that is one big blur.”

He found out recently from his mom that he and his two sisters continued to attend school that week.

“She didn’t keep us home because she didn’t know what else she would do with us,” Keith said. “It was so hectic.

“We had all of our family at our house, all of our friends coming by, people making dinner for us and our family so mom didn’t have to do anything. For the next few days, we were watching the news, waiting for phone calls.”

The next thing Keith remembered after hearing his mom explain what had happened was pulling up to the memorial service in a limo. He said more than a thousand people came to the church; the street was lined with townsfolk, his dad’s friends from the FDNY, and his little league baseball team – which his dad coached. But he said he was overwhelmed and didn’t fully grasp what was going on.

“I was looking out the window of the limo and was like, ‘Hey look, there are these people we know,’ and obviously my mom was just not in that state of mind,” he said.

The ensuing ceremony seemingly was the toughest part for Keith to bear. His uncle Jim McCaffrey, who has been with the FDNY for 25 years and currently serves as a lieutenant, gave a speech.

“I remember him going over to the big portrait that we had of him and he saluted. That … wasn’t good for me,” Keith said. “Then after the church I remember being handed my dad’s helmet from one of the fireman.”

Keith still has the helmet stored at home.

And while studying abroad in Florence, Italy, during the last spring semester, he didn’t forget about his dad – especially on the morning of May 2.

“When I was there, we got Osama [Bin Laden],” he said jubilantly. “It took 10 years, but it was the closest thing we got to closure.”

His family remembers Orio on the holidays, but having a day when the whole nation honors his dad and the nearly 3,000 people who died is when it is most meaningful to Keith. He usually goes home to Point Lookout in Long Island, for a “really nice ceremony” to gather with his family and close friends.

For the 10th anniversary of 9/11 two months ago, Quinnipiac hosted its annual candlelit vigil on the Quad. That morning, Alex Forman, Keith’s former roommate at Quinnipiac and close friend, read Keith’s dad’s name from the steps of Arnold Bernhard Library.

“I choked up, I definitely took a pause,” Forman said. “Knowing Keith and knowing his family and just how strong they are, the whole situation, it destroys me every single time I think about it, but I’m glad to be his best friend.”

Keith says people have asked how he, his sisters and mom made it through the whole situation seemingly unscathed. He credits the support of his extended family and friends, but most notably his mom.

“She is the strongest person I know,” he said. “She was our rock throughout the whole thing.”